“Who stands fast? Only the man whose final standard is not his reason, his principles, his conscience, his freedom, or his virtue, but who is ready to sacrifice all this when he is called to obedient and responsible action in faith and in exclusive allegiance to God — the responsible man, who tries to make his whole life an answer to the question and call of God.” ~Dietrich Bonhoeffer, Christmas Eve 1942

The life of a disciple is active, not reactive. It has nothing to do with just talking about faith or teaching religious principles or believing theological ideas or keeping biblical rules. It has everything to do with living one’s whole life in obedience to God’s call through personal action. It doesn’t just require a mind. It requires a body, too.

Ours is a life given to us by God to be lived not in some kind of rigid, cramped, crowded, small, compromised, legalistic way but in a full, wild, joyful, exuberant, cheerful, celebratory way. A way that apprehends and assimilates and then radiates the freedom we have from God in Christ.

The way I see it, a full grasp of the freedom we have in Christ and the grace and mercy we’ve received from our God will come to mean, eventually,  that we are no longer afraid of sin. We’re not worried about messing up. We don’t hold back because of an anxiety over doing something that might displease our God. At the very least — stay with me here — avoiding sin will not be the main thing that drives us as we follow our Lord.

Our Father wants his beloved children to operate out of joy and freedom to do what is good and right, not out of fear of making a mistake. Isn’t that one of the great lessons in Jesus’ story about the servants and the talents in Matthew 25?

We must be more zealous to please God than to avoid sin. We must act in faith that our God who calls us to live boldly and outrageously for him also promises us that if and when we do mess up in enthusiastic service to our King, he promises forgiveness and consolation and salvation.

The Christian life is an active life. Our God calls us to give our whole selves to him. Brakes off. No looking back. Full speed ahead. He’s not going to punish us when, in pursuit of his will, we might mess up. 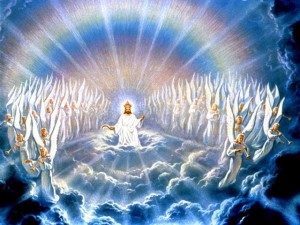 Last Sunday’s sermon on Christ’s return from Revelation 21-22 prompted many, many kind comments and encouragements from dozens of my brothers and sisters here at Legacy. Many had never thought about heaven and earth and God’s ultimate mission in the ways Scripture so plainly paints it. Many seemed refreshed at the biblical promises that God’s will is ultimately going to be done on earth just as it is in heaven. That’s why we’re told to pray it, right? And that’s why we join it. The mission. The salvation objective. Those are the things we’re going to be considering together during Missions Month throughout March.

In a related item, Patrick Mead has posted a hilarious re-cap of all the individuals and groups throughout history who have predicted the return of Christ and the end of the world. Of course, mankind has a 100% fail rate in this useless undeavor. But the list is hilarious. I especially like the parenthetical comments in his list. One mentions the possibility that Van Halen may be the anti-Christ which may or may not, combined with Orwells’ vision, have led to the speculation about the year 1984. There’s a group called the Sword of God Brotherhood that is claiming the end of the world will come in 2017. They say that they alone will be spared and tasked to repopulate the earth. Here’s hoping there’s a Sword of God Sisterhood, too.

You can read the complete list by clicking here.

I’m 24 hours away from my annual camping trip with my Four Horsemen friends. A weekend of encouragement, prayer, meditation, food, bonding, and at least one unforeseen near-catastophic incident to remember forever. These are the guys. These are the ones. They are my closest friends. They keep me going. They keep me accountable. They challenge me and they exhort me. They mature me in our faith. They inspire me to be a better man, a better husband and dad, a better preacher, a better disciple. Even while we’re throwing rocks at raccoons and making fun of Dan’s always-on survival mode, Jason’s tough guy facade (what a fake!), and Kevin’s wardrobe.