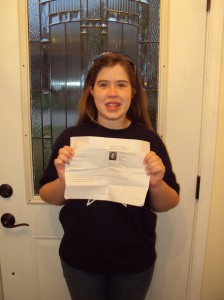 She did it. Friday afternoon at the DPS office in Lake Worth. Whitney expertly whipped the truck in between the two yellow poles like she’d been parallel parking for years. Then she took off with the trooper in the passenger seat and returned fifteen minutes later with her real State of Texas issued driver license. A banner day for the Whitster! And a weird day for her parents.

Our oldest child is driving now. A glorious day of freedom for us, right?

Well, yes. Absolutely. There’s tremendous freedom for us in that I didn’t have to get out at 10:45 Friday night to pick Whitney and Valerie up from the youth group movie thing at the church. Whitney drove them home. Yesterday afternoon, when it was time for LTC practice, Whitney drove Val and Carley to the church; not me. So, yes, freedom.

When Whitney took off for the movie thing Friday night she had explicit instructions to text me the moment she arrived. Nine minutes. Ten minutes. Eleven minutes passed. Carrie-Anne and I just stared at my cell phone. We just stared at it. Why hasn’t she texted yet? Shouldn’t they be there by now? It usually only takes me eight or nine minutes. Should we have followed them? Why aren’t they there yet?

I was in the yard yesterday Miracle-Growing our flowerbeds when all three girls took off for LTC. Once they turned out of sight, Carrie-Anne observed, “You realize all three of our children are in the same car at the same time. And Whitney’s driving!” She shouldn’t think that way. But I know I never fully relaxed until Whitney was safe at home 25 minutes later. I piddled around outside, right by the street, until she returned.

I’m sure this will get better. But, wow, it’s hard letting her just take off like that.

Of course, we’re very proud of Whitney. She’s overly careful and cautious behind the wheel which is far better than being underly careful and cautious. She has lane-change issues and still has a hard time maintaining a steady speed. But she’s an excellent observer and a master on the blinker. And she has a terrific sense of direction. She’s going to be great.

As for her mom and me: our cell phones just became a lot more important.