Where is Jesus? Part Three

Please keep my darling wife Carrie-Anne in your thoughts and prayers for the next few days. She’s having surgery this afternoon to repair a fairly significant hole in a sinus passage. The surgery is only supposed to take about an hour and a half, but everybody’s telling us the eight days after are going to be horrible. As you’re probably aware, Carrie-Anne has the best looking nose in our family, and we don’t want anything to happen to it. 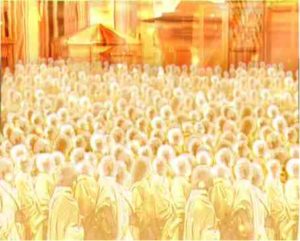 “Since, then, you have been raised with Christ, set your hearts on things above, where Christ is seated at the right hand of God.” ~Colossians 3:1

“God raised us up with Christ and seated us with him in the heavenly realms.” ~Ephesians 2:6

It’s a well known and well rehearsed spiritual reality that by our baptisms we all participate in the death, burial, and resurrection of Jesus. We are united with Christ, we are one with him and share in his death and resurrection. But the Scriptures are clear that we also share in his ascension. We reign over the world with Christ both now and, ultimately, when he returns, in the future forever. We’re co-regents, co-rulers with Jesus.

Reigning and ruling with Christ means the Church — empowered by the presence of Christ by the grace of the Holy Spirit — enters the world vulnerable and suffering, praising and praying, sacrificing and serving. The Church lives in the world as misunderstood and misjudged by humanity, saved and vindicated and raised by God. Like Jesus. Why would we ever believe we can reign with Christ if we’re not going to reign like Christ?

Man, that’s a good sentence right there. I’m going to write it again. Maybe you should tweet it right now: Why would we ever believe we can reign with Christ if we’re not going to reign like Christ?

We like the idea of Jesus being with us everywhere, even inside us. Jesus is present with us because of his Holy Spirit. He dwells in and with his Church. But the One who is present with us and living inside us by his Spirit is also the King of Kings and Lord of Lords who rules with all power and authority from a position over us, directing us, rebuking us, encouraging us, teaching us. So, yes, in a very real sense we do reign with Christ today in the heavenly realms, but only in the ways he directs — with Jesus, in the name and manner of Jesus.

We are a kingdom of priests, or kings and priests, it depends on how it’s translated. Either way, it means we participate in the reign of God like Jesus. We have important roles to play, we have Christ-ordained jobs to perform with our Lord as he brings his Kingdom rule to earth just as it is in heaven. But we don’t fight what’s wrong in the world with the power of the sword, we use the power of love. We don’t threaten or condemn anyone; like our Lord, we suffer and we serve everyone. We’re priests, so we intercede, we pray, we bring the world to God, we lift up people to God. We cannot bring in the Kingdom of God, but we can witness to it. We can’t create the Kingdom of God, but we can set up signs and tell stories. We can’t build the Kingdom of God, but we can live it with humility and faith — turning the other cheek, walking the extra mile, forgiving others, giving up our freedoms and rights, loving our enemies, and praying for the people who want to do us harm.

Jesus is bringing his eternal rule to this world in ways this world does not understand. 1 Timothy 6 says it’ll happen in God’s own time. He is with us, yes. We reign with him, oh yeah. But he is our Lord. And for us to use methods that are contrary to Jesus’ methods is to reject him as Lord and to try to establish a rival kingdom.