In the summer of 1985, I was a high school graduate a couple of months away from college. I was working for Don Cobler at Dallas Christian with my best friend, Todd Adkins. And we decided, almost on a whim, to attend the annual Texxas Jam at the Cotton Bowl.

I had never been to a real rock-and-roll concert, certainly not a festival-style rock show like this yearly event. In fact, my only concert experience had been a Huey Lewis and the News show at Six Flags the previous spring. Doesn’t really count, I know.

So, Todd and I geared up for the Texxas Jam. Saturday, August 24. We drank a lot of water and Gatorade. Todd’s mom

packed us peanut butter and jelly sandwiches. My mom prayed. I was wearing Texas flag themed shorts and a 98-KZEW “The Zoo” T-shirt. We parked my 1974 Monte Carlo under the bridge at I-30 and 2nd Street and walked into Fair Park and the Cotton Bowl. Todd and me and 135,000 other idiots.

Deep Purple had just released a comeback album (Perfect Strangers), and they were the headliners. The Scorpions were playing. Bon Jovi was there, a little known band at the time, touring the country on the strength of their first, and at that time, only, hit, “Runaway”. They were so new and unknown, Bon Jovi actually played at noon that day.

3:00 that afternoon. Hottest part of the day. It must have been 130-degrees on the floor of the Cotton Bowl. Security personnel were spraying down the crowd with giant fire hoses from the stage. I saw at least four or five people pass out from heat exhaustion. Or heat stroke. Man, it was hot. And crowded. Todd and I had gone into survival mode. Over the course of the four or five hours we had already put in, we had managed to make our way to about ten or eleven rows from the front of the stage. I was trying to manuever closer for the Scorpions who were set to take the stage at 5:00. 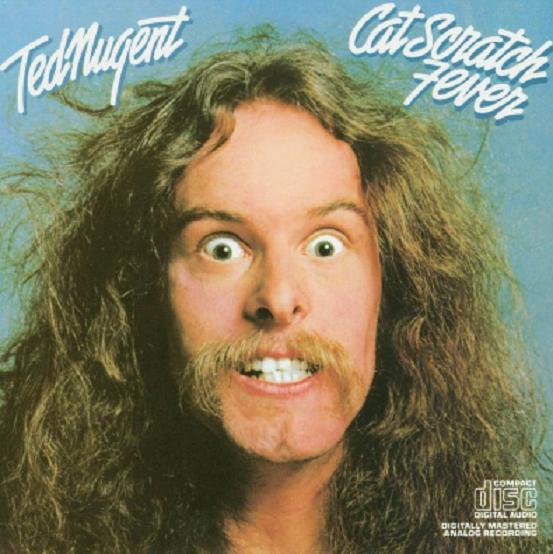 But then the Motor City Madmad took the stage, swinging down on a rope from the rafters, wearing nothing but a loin cloth and cowboy boots. And he started yelling and screaming like a maniac. He told us all how glad he was to be in Texas. He told us all how friendly we were and how pretty the girls were here. He told us just how loud he was going to play and just how much of his heart and soul he was going to give to us and just how much he really expected us to participate with him. And for two solid hours he did. And we did. He was loud. He was over-the-top and in-your-face. Crazy. Amazing.

And two out of every three words out of his mouth were filthy curse words. Profanity like I’d never before heard in my life. Ever. And I’d been roofing houses for three years. I’d heard dirty language. I was familiar with the genre. But I’d never heard anything like this. Seriously, every other word.

I had no idea a person could really talk like that. He played an amazing guitar. He put on a show that rivals the best I’ve ever seen since. But I couldn’t get past the language. It was too much.

Following that show, Todd and I began referring to cursing and profanity as “pulling a Ted.” We called people who cussed all the time, Ted. It evolved over the next several months as a way to substitute Ted’s name for actual curse words. It became our catch-all by-word or euphemism. Other people have “Crud!” or “Gosh!” or “Holy Smokes!” or “Shoot!” or “Hannah Marie!” (That’s what my dad says.)

An exclamation used when one realizes things are not going well or when something suddenly goes very wrong.

You’re in a hurry and the traffic light turns red. “Ted.”

Some guy pulls out in front of you on LBJ and causes you to hit a guardrail at 60 miles-per-hour. “Ted Nugent!!!”

For 25 years now I’ve been using Ted Nugent’s name in vain. My family says “Ted.” My co-workers — back in radio and even in the Church — have all heard me say “Ted” and have even said it themselves in rare moments of surprise and carelessness. I use the expression on the basketball court. I use it when I’m working on my truck and when I’m putting up Christmas lights. We had a fish named “Ted” in my dorm room in college. I tried to get Valerie to name her hamster “Ted.”

So, Saturday night, I’m in Glenn Branscum’s suite again for the Cowboys playoff game against the Eagles. (Thank you, Glenn. Thank you. Thank you. Thank you.) We’d been there a little over an hour when all the servicemen and military personnel brought the huge American flag onto the field for the National Anthem. And the P.A. announced that, here to perform the Star Spangled Banner…please welcome…Ted Nugent!

And there he was. In all his maniacal in-your-face glory. Hunting jacket. Cowboy boots. Camo hat. Pony tail. And — no offense and no disrespect intended — he absolutely ripped the snot out of the national anthem! He nailed it. Jimi Hendrix style. Wow. I was blown away. He had all 92-thousand-plus on their feet and cheering throughout, especially as he built up to and then held those last few notes. Man! What a rush.

And as I settled back into my black leather chair (Thank you, Glenn. Thank you. Thank you. Thank you.) and reviewed the horrible video and audio I had just barely captured on my cell phone, Trent Podsednik leaned over to me and said, “You know Ted Nugent is just three or four suites over from this one.”

I grabbed my camera, a program, and a Sharpie, and bolted to the door.

Karen and Stacy and I waited at the elevator for between ten and fifteen minutes and, finally, here he came. Ted Nugent! I gave my camera to Karen and approached him with great boldness. I introduced myself and he acted genuinely pleased to meet me. (Of course he was; how could he not be?) He stopped long enough for me to talk to him about that Texxas Jam in ’85. He said I was about the 30th person to mention that show to him that night. He paused for a couple of pictures. He autographed the fronts of all our Cowboys programs, said “God bless you” twice, and ducked into his suite.

My heart was pounding. I could barely breathe. It took me most of the first quarter to calm down.

There were a lot of famous people there at Cowboys Stadium Saturday night. Someone pointed out George W. Bush. Yeah, I thought, I’ve interviewed him one-on-one two or three times. Roger Staubach was there. I sat next to him at Tex Schramm’s Ring of Honor press conference. Emmitt Smith? I was there with him before and after his record-setting day at Texas Stadium. I’ve spoken to him hundreds of times. Same with almost everybody else in the building. Preston Pearson. Dan Reeves. Michael Irvin. I’ve done shows with those guys. But walking up to Ted Nugent and speaking with the Motor City Madman in person had me shaking like a little girl. I was downright giddy. Floating. Grinning like a fool for the rest of the night.

I didn’t tell Ted that three generations of my friends and family regularly take his name in vain. It’s too long a story and I’m not sure he would understand. But meeting this rock legend Saturday night and sharing a brief Texxas Jam memory with him in the hallway at Cowboys Stadium was cool. Very, very cool.

Don’t tell anybody you read this. It’s kinda weird.