Actually reading Thomas Campbell’s Declaration and Address, which he started writing 200 years ago this week, is eye-opening to someone who’s only familiar with the superficial “Bible-only” and “Christians-only” bumper sticker slogans we’ve harvested from our movement’s founding document. This work is a passionate plea for Christian unity as described in our Scriptures and prayed for by our Savior. It so clearly outlines the breaking down of denominational barriers and the demolition of anything that would keep us from calling one another brother and sister and communing with each other around our Lord’s table as our God’s holy and perfect will. And it calls on each and every member of the Lord’s Body to work diligently toward that end. The Declaration and Address is saturated with the question, why pray for something if you’re not going to work to make it happen?

But Campbell especially appeals to preachers as the ones who must step forward to carry Christ’s mission of unity for his Church.

“Is it not then your incumbent duty to endeavour, by all scriptural means, to have those evils (divisions) remedied. Who will say that it is not? Does it not peculiarly belong to you, who occupy the place of gospel ministers, to be leaders in this laudable undertaking. Much depends upon your hearty concurrence and zealous endeavours. The favorable opportunity which Divine Providence has put into your hands, in this happy country, for the accomplishment of so great a good is, in itself, a consideration of no small encouragement.”

(Of course, much more was expected of preachers back then than is now. At the end of the Declaration portion of the document, in article VIII, Campbell makes it clear that “each meeting of the society be opened with a sermon.” Can you imagine? What if the elders of your church insisted that every elders meeting start with a sermon?)

Campbell calls on preachers to do the will of Jesus

“…whose express command to his people is, that there be no divisions among them; but that they all walk by the same rule, speak the same thing, and be perfectly joined together in the same mind, and in the same judgment. Let us attempt it. Are we not all praying for that happy event, when there shall be but one fold, as there is but one chief shepherd. What! Shall we pray for a thing and not strive to obtain it! Not use the necessary means to have it accomplished!!

Let the ministers of Jesus but embrace this exhortation, put their hand to the work, and encourage the people to go forward upon the firm ground of obvious truth, to unite in the bonds of an entire christian unity.”

Usually it’s the obvious truths that get us all in trouble.

That’s why Campbell’s encouragement is so needed. And that’s why he and Stone and the rest of the leaders of our Restoration movement are such heroes.

May we work hard to uphold the ideals of those who’ve gone before us as they reflect the perfect will of our Father in heaven. May God bless us with boldness and courage and power from his Holy Spirit to lead his people in the paths of greater unity for the salvation of the world!

23 days until the Cowboys open up their regular season against the Bucs in Tampa Bay. And we’re counting down the days by honoring the second-best players in team history according to jersey number. #23 in our Red Ribbon Review is backup cornerback Robert Williams. As an undrafted free agent out of Baylor in 1987, Williams played on some of the worst teams in Cowboys history. But he hung on long enough to collect two Super Bowl rings in 1992 and 1993. He carries the distinction of having scored two TDs in a Cowboys uniform, both of them on blocked punt returns.

Tomorrow’s #22 is a no-brainer. He’s a Hall of Famer, a Ring of Honor member, an olympic gold medalist, and he holds 22 Cowboys team records. Hard to believe he’s still only the second-best player to wear #22. Bullet Bob Hayes was taken in the seventh round of the 1964 draft out of Florida A&M and wound up changing the game of professional football. Known as the fastest man in the world after breaking four records at the 1964 Olympics, Hayes blew right by everybody who tried to cover him on the football field. So defenses were forced to try brand new things. Like zone coverage. Unheard of.

Hayes played ten seasons in Dallas and finished his career with an astonishing 20.0 yards per catch average. He averaged 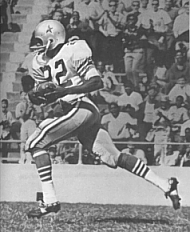 over 18 yards per catch in seven of his ten years, including league-leading averages of 26.1 yards in 1970 and 24.0 yards in 1971. He finished in the NFL’s top six in yards receiving five times and was named to three Pro Bowls and twice as a first-team All Pro. Hayes racked up 7,295 yards on 365 catches with the Cowboys and 71 touchdowns. And he’s the only man to have ever won an Olympic gold medal AND a Super Bowl ring.

None of this information came from Lucille Hester. And I’ve got a letter from Bob to prove it.