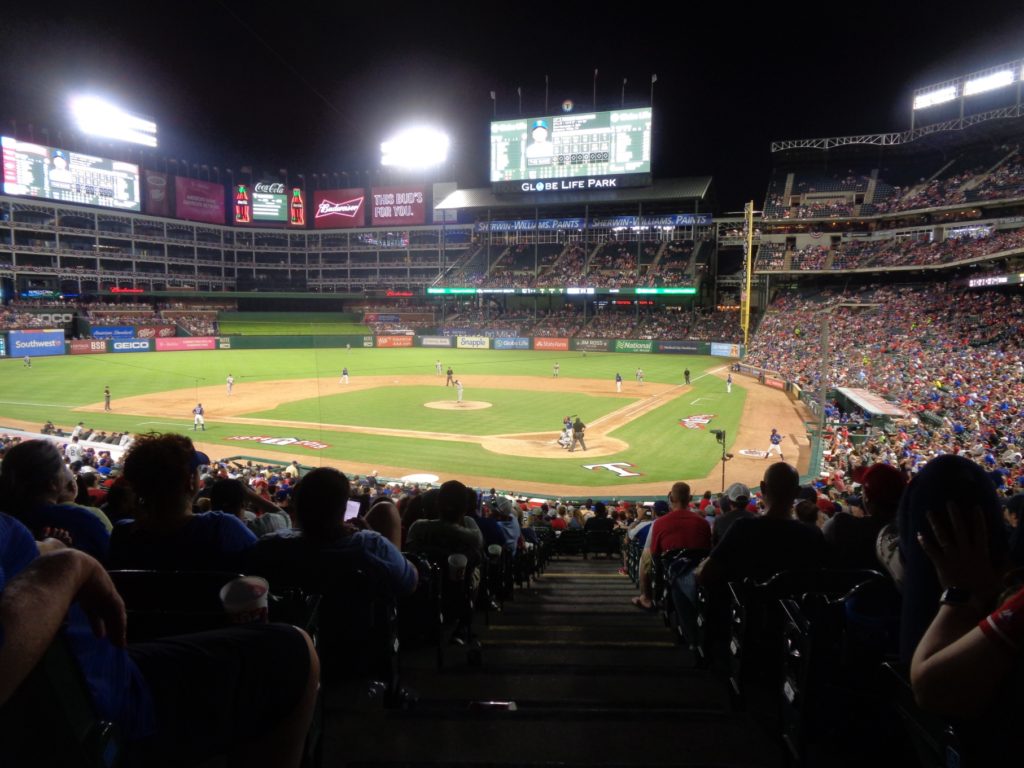 We picked the wrong night to celebrate the Rangers and soak up Ballpark memories in Arlington. The Yankees scored more in their rout of the Rangers Friday than the Saints scored last night in a win over the Cowboys. The Rangers closed out their 26-years at the Ballpark by taking two out of three from the hated Pinstripers. But in the opener Friday, Texas pitchers gave up 18 hits, 14 runs, and six homers in an embarrassing blowout in the next-to-the-next-to-the last game ever at the “Temple.” 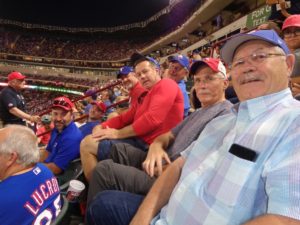 Bruce won our homerun pot when the second batter of the first inning went yard on Palumbo. And it was pretty much downhill from there. It was never as close as the 14-7 final might indicate. But, a bad day at the Ballpark is better than a good day almost anywhere else.

I thoroughly enjoyed my last ever nachos with extra peppers and Diet Dr Pepper at the Ballpark, I relished Chuck Morgan’s announcements, I marveled all over again at the Texas granite and stone murals that make up the exterior of that gorgeous shrine to the Lone Star State, I bought Whitney a Pudge Rodriguez Hall of Fame T-shirt for $5.40, and I watched wistfully as the late evening closed with a video tribute to the Ballpark’s greatest moments against the backdrop of the traditional Friday night fireworks.

Big picture, this whole thing is much more bitter than sweet for me. I still can’t believe the Rangers are moving out of this pristine, classic stadium for the slick, steel behemoth of an air-conditioned anathema across the street. It boggles my mind and nauseates my gut.

It doesn’t feel like going to a football game when you’re at Jerry Wayne’s “Death Star.” I’ve been to Cowboys games and college games in that building, and it’s more like going to a huge hotel convention center than an NFL or NCAA football game. You feel like you’re walking through a fancy airport instead of through a concourse at a football stadium. You’re very very very removed from the action on the field — by distance and screens and speakers and a massive roof. The whole thing’s just really fake. And I’m not sure how the Rangers avoid that in their new indoor digs.

I attended the last ever game at the old Texas Stadium. Watching the Ravens beat the Cowboys that night, it was obvious the stadium needed to be replaced. It was old, outdated, and falling apart; rusty rails, water leaking and standing everywhere, weird smells, missing ceiling tiles, cracks in the concrete, faded paint. Not once did anybody in Arlington this year think that about the Ballpark. It’s not right.

I was fortunate to have watched somewhere between 350-400 Rangers games inside that majestic Ballpark. And it was a blast taking in my last one Friday with some really great friends from Amarillo. I’m thankful.

I’m not sure what next year looks like. I’m sure we’ll still take our twice annual trips to Arlington. I’ll eat nachos and drink DDP, I’ll sing along to “Deep in the Heart of Texas,” and Chuck Morgan will still be announcing the batters and pitchers and calling the dot races. But I might be wearing a jacket. In August. Drinking hot chocolate. Yikes.