The Johnson Amendment & The Church 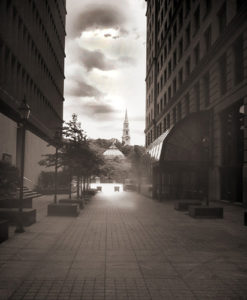 You would be so proud of me. I’m showing such tremendous restraint in my old age. Yesterday’s Amarillo Globe-News published a front page story on U. S. President Donald Trump’s oft-repeated promise to abolish the Johnson Amendment with this accompanying headline: “Many local faith leaders support president’s vow to ‘destroy’ political ban for churches.” The same issue’s editorial contained an over-simplified analysis of the amendment that more or less argued that, since we all know which churches are politically conservative and which churches are politically liberal, the Johnson Amendment doesn’t really matter. So why are we making such a big deal about it?

I did not write a letter to the editor. I did not call the Faith reporter. I did not send out an email to my fellow Gospel preachers who are quoted in this story as being in favor of abolishing the amendment because our religious liberties are under siege.

I slept on it. And I’m responding with this post.

This will be short.

First, there has never been and isn’t currently any kind of threat in this country against any pastor or church preaching and practicing the politics of the Kingdom of God which, by the way, are the only politics Christ’s Church should be concerned about. Love. Forgiveness. Mercy. Grace. Gentleness. Helping the helpless. Healing the sick. Worshiping in spirit and truth. Obeying the Law to love God and love neighbor. Would somebody please explain to me how any Christian is being told he or she cannot do those things?

Some of my fellow preachers in Amarillo are quoted in the paper as saying it’s an “overreach of the government’s authority to restrict what a pastor says from the pulpit on any subject, including politics” and that “freedom of speech shouldn’t stop at the local church doorsteps; The church… needs to be a voice to the community.”

So you think we should preach Christian values and Christian ideals and Christian beliefs and morals to the Christian members of our Christian churches? Me, too. Big time. What does that have to do with this country’s political parties or candidates? Our King tells us that bigotry and inequality and violence and discrimination and oppression — SIN! — are solved by love and grace and forgiveness, not politicians and votes and laws. Salvation from God in Christ is the only answer to what’s wrong with you and me and the Church and this country. The only thing a preacher can’t do in his or her pulpit is advocate for a particular party or candidate. My question is, as a preacher of the Good News of Jesus Christ, why would you ever? Touting somebody or some thing other than Jesus as the solution for sin would seem to disqualify one as a proclaimer of the Gospel.

Second, Christians come across as really petty and small when they complain about government interference. Churches in this country don’t have to pay taxes!!!! Everybody knows churches don’t pay taxes. You knew that, right? Don’t these faith leaders know it? We stand out as arrogant and entitled when we say, as one local preacher did in the AGN story, the Johnson Amendment “should not keep the church out of matters of the state, but rather should keep the state out of matters of the church.”

We don’t pay taxes!!!! The state is very much “in the matters of the church.” I don’t think totally removing the state from church matters — doing away with the tax breaks — is what he has in mind. It would be the best thing that could happen to the Church in the United States; but something tells me that’s not what he’s advocating.

Third, the last thing God’s Church in America needs is any kind of political “victory” delivered in the name and manner of Donald Trump. Can you just imagine the misguided ways in which that would be interpreted and then used? Abolishing the amendment would not only compromise the voice of Christ’s Church, it would bring out the worst in the people of Jesus. We would lobby and petition, boycott and campaign, write letters and print posters and stump for particular candidates in a specific party. And then we’d get offended or angry if someone pointed out how unfair it is that U.S. taxpayers are forced to fund our political group but not anybody else’s political group. Yuk.

I’m so grateful for my brother Burt Palmer of Polk Street United Methodist Church, the lone voice of reason among the Amarillo preachers responding in print to Trump’s pledge. Burt told the Globe-News that the total repeal of the Johnson Amendment “may lead to religious organizations being consumed with advocacy for a specific party or platform. He adds that the Church’s role is “to rise above [party] affiliations… sharing the message and love of Jesus Christ.” Burt warns about Christians and churches “slipping and sliding into serving the god of a political party.”

Finally (this is longer than it should have been), a response to the paper’s position itself.

The AGN editorial piece claims that repealing the Johnson Amendment is inconsequential because most Christians already know which way their church leans politically. By extension, I suppose, the community, too, knows whether a specific congregation of God’s people is politically conservative or liberal. Because of the preacher’s sermons on social justice issues, because of the political candidates the church may choose to invite to speak, it should be clear, so the editorial argues, how the pastor or the church feels politically. So, the Johnson Amendment doesn’t really matter.

I pray that after listening to me for only a short while, my parishioners at Central have a clear understanding that my political beliefs line up first with our King Jesus. I pray that my sermons and my statements about current issues are completely confusing to anyone trying to peg me or our church to a specific party or a particular candidate. I am aware of no party in this country that is pro-life to the max: anti-abortion, anti-war, and anti-death penalty. I don’t know of any politician who is both opposed to gay marriage and for welcoming refugees. Is there any candidate who will denounce both the killing of unborn babies in abortion clinics in this country and the killing of born babies in war efforts in other countries?

Jesus Christ does not fit neatly into a nationalistic political party. God’s Church cannot be defined by the platform of a power-seeking coalition of politicians.

Survey after survey shows that young people and millennials are turned off by the Church’s affiliations with the political right. We’ve somehow aligned ourselves with a worldly party in a worldly kingdom with worldly goals and worldly means of accomplishing those goals, and it’s nauseating to lots of people who are conditioned to see right though it.

We are beyond this. We are above it. We do not want to be associated with it.

You’re right, Amarillo Globe-News, the Johnson Amendment doesn’t matter at all. But not for the reasons you believe.