“If even a tenth — a remnant — survive,
it will be invaded again and burned.
But as a terebinth or oak tree leaves a stump when it is cut down,
so Israel’s stump will be a holy seed.”
~Isaiah 6:13 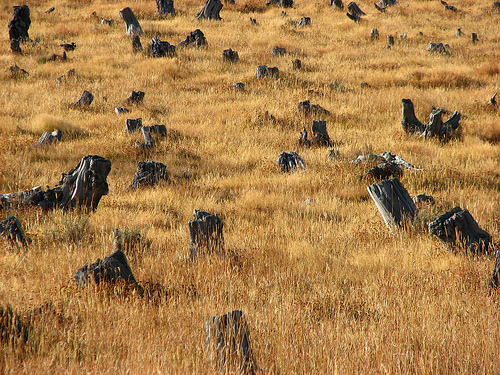 God calls Isaiah to preach to people who will hear but never understand, to a nation that will see but never perceive. Their hearts will be calloused, their ears will be dull, their eyes will be closed. And this ministry of failure is to continue until all of Israel is wiped clean. Isaiah is called to a faithful proclamation of God’s Word — non-negotiable repentance and commitment to the Lord and his ways — until the enemies haul everything away and there’s nothing left but stumps.

A desolate land of stumps.

How do you feel when the doctor diagnoses cancer and gives you or your loved one just a short time to live? What does it do to you to learn that you’re now unemployed? When your spouse says, “I want a divorce”? When your children leave our Lord and his Church? When physical pain dominates your existence? When loneliness pushes in on you? When your faithfulness to the Lord seems to only result in bad news? How do you feel when your own life — to you and to everyone who sees you — resembles a stump in a vast field of stumps?

Please remember the stump is holy. Keep in mind that there’s seed in the stump. Holy seed. Our loving and powerful God is working right now to produce something beautiful from the ugly stump. His plan is to bring salvation from the stump.

The same God who brings order out of chaos in the opening lines of Scripture, who raises a mighty nation from a 90-year-

old barren womb, who lifts the ruler of Egypt from the bottom of a well, and delivers his people to the Promised Land through a desert is the God who brought the Savior of the World from the stump of Israel. The holy shoot from the holy stump of Jesse!

Stay strong. Be faithful. You may not see it. But the stump is holy.

73 days now until the Dallas Cowboys kick off their 2009 season. And we’re counting down the days with what we’re calling the Red Ribbon Review, a look at the also-rans when it comes to the best ever Cowboys. The second-best Cowboys player to ever wear jersey number 73 is big, huge, massive, large, offensive lineman Larry Allen.

Allen played 12 seasons in Dallas during the Jimmy Johnson-induced “big is beautiful” era of offensive linemen. According to his bio, Allen stands 6’3″ and weighs 325. It was more like 345. Or 375. It appeared to fluctuate wildly. But he wasn’t just big. He was super strong. Allen bench-pressed an even 700 pounds during the 2001 training camp in Wichita Falls, an NFL record that still stands. At the time the team was boasting that Allen had only 11% body fat, translating to 300 pounds of pure muscle and bone.

dominant force on some pretty bad teams during the Gailey and Campo stints. Allen certainly benefitted from Emmitt Smith’s skills and stats. He also got a lot of mileage out of John Madden’s hyperbolic descriptions of Allen’s size, his blocking, and his value to the team. Still, when the Cowboys cut him going into the 2006 season, he was the last remaining player to have participated in a Cowboys post-season win.