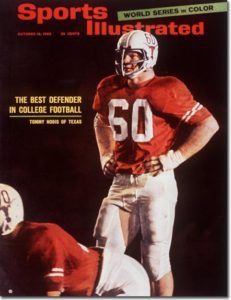 A Texas Longhorns football legend and the best two-way player Darrell Royal said he ever coached died yesterday. Tommy Nobis, a two-time All America and the only sophomore starter on the Longhorns’ 1963 National Championship team, passed away at 74. In my view, he is the greatest football player to ever wear the number 60, edging out contemporary linebacking cohort Chuck Bednarik. Nobis played both offensive guard and middle linebacker for the ‘Horns for three years, leading Texas to a 27-5 overall record and that national title. He was named All Southwest Conference twice, he was the team MVP twice, and in 1965 Nobis won the Maxwell Award as college football’s best all around player, the Outland Trophy as college football’s best lineman, and finished seventh in the Heisman vote. The expansion Atlanta Falcons made Nobis their overall number one pick in franchise history, outbidding the AFL’s Houston Oilers who also drafted him number one. And in that first NFL season, Nobis racked up an average of 21 tackles per game and won the league’s Rookie of the Year honors. He played in Atlanta for eleven years, leading the team in tackles for nine of those years, making the Pro Bowl in five of those seasons, and earning the nickname “Mr. Falcon.” From Thomas Jefferson High School in San Antonio to the College Football Hall of Fame and the cover of Life Magazine and the Falcons’ Ring of Honor, Tommy Nobis was the consistent picture of rich character, immense talent, and deep loyalty. God bless Tommy Nobis and his family. 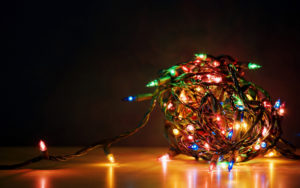 There’s a difference between advice and news. Advice is concerned about what you should do; news is a report about what’s already been done. Advice tells you to make something happen; news tells you something’s already happened and compels you to respond. Advice says it’s all up to you to act; news says someone else has already acted.

Let’s say there’s an invading army coming to town and they’re bent on killing all of you and destroying everything you have. What you need is advice. You need advisors. You need someone to explain, “OK, we need to dig the trenches down here and put the snipers up there. We need to move our troops in that direction and place the tanks over in this direction. We need to do these things to be saved.”

But what if a great and powerful king intercepts the invading army and destroys it? What does the town need then? You don’t need advisors, you need messengers. And the Greek word for messengers is angelos: angels. And these messengers don’t say, “Here’s what you need to do to be saved.” They say, “I bring you good news of great joy that’s for all the people! Today in the town of David a Savior has been born to you. He is Christ, the Lord!”

Glory to God in the highest, and on earth peace to all people!