Jerry Wayne in the Hall of Fame

This post is about the weekend election of Jerry Wayne into the once-proud Professional Football Hall of Fame. I’ll add a few observations from last night’s Super Bowl at the end.

So Jerry Wayne is in the Hall of Fame.

I need to take a shower. And brush my teeth. And gargle. Twice.

Enshrining the Cowboys’ owner with the immortals in Canton values making money and turning a profit over winning football games and capturing championships. Jerry was elected solely on his ability to multiply cash. And it’s sickening.

Give Jethro all the credit in the world for buying the Cowboys for 140-million dollars in 1989 and turning them into the world’s most valuable sports franchise at four-billion-plus-dollars today. But at the same time, recognize that Jerry has driven one of the NFL’s marquee franchises into a 21-years-and-counting streak of complete irrelevance on the field. Honor Jerry Wayne for sticking it to the networks and raising the annual revenue the league takes in on television contracts to 44.5-billion dollars. But, keep in mind that the Cowboys have not won a divisional round playoff game since Toy Story was released as Pixar’s very first full-length animated movie. Sure, praise Jerry for sticking with Pepsi and wearing Nike and going with Miller Lite and putting on Papa John’s pajamas to revolutionize the way the NFL does marketing agreements and stadium deals. But don’t forget that he fired Jimmy Johnson for winning back-to-back to Super Bowls and hired Barry Switzer. And Dave Campo. 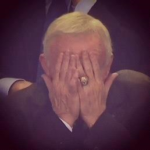 Yes, for more than two decades Jerry Wayne has made the NFL and all its team owners more money than they could have ever possibly dreamed. Jerry is a genius when it comes to making money. When it comes to stadium revenue, team marketing, club sponsorships, labor negotiations, and TV contracts, there’s no stopping Jerry Wayne. He’s going to win those games every time.

At the expense of his team on the football field. Every time.

The timing’s good for Jerry, huh? I wonder if Jerry had been eligible last year, when the Cowboys were 4-12, if he would have received the votes. What if his name didn’t appear on the ballot until next season when Dallas will be playing a bunch of division winners on its schedule instead of this year’s cellar dwellers? Would he still be elected?

Jerry has demonstrated over and over that making money is a whole lot more important to him than winning championships. He proves it every year. He’s fond of saying that nobody ever really owns the Cowboys; one only takes care of them for a while before passing them on. When that day comes, the Cowboys will be richer in the bank than when he first took over, but in far worse shape on the field.

The Hall of Fame inducted Tex Schramm and Tom Landry for building a dynastic team that posted 20-straight winning seasons, went to Super Bowls, won championships, and captured America’s heart with its dramatic performances of grace and power on the field. Now the Hall of Fame has inducted Jerry Wayne for making a whole lot of money for the NFL owners. The fact that he’s destroyed the on-field product in the process doesn’t seem to matter.

All credit to Brady and Belichick and the Patriots’ D. Let’s recognize that coming from 25-points down to win the Super Bowl is a monumental achievement. Let’s acknowledge that holding the wild Falcons’ offense to zero points over the final nineteen minutes is an incredible accomplishment. But let’s never forget that Atlanta cost themselves the trophy. They gave it away.

I don’t pretend to know all that happens on the field and on the sidelines, in and in-between the huddles, in the headsets, and player-to-player. I know it must all happen extremely fast. But coaches and quarterbacks do things all the time that make no sense.

For example, at the end of the game-winning drive in overtime, after the pass interference in the end zone, on first and goal at the one yard line, why did Tom Brady throw a fade route to the corner? It was nearly picked off! One more half-a-step and the linebacker intercepts and the Falcons get the ball at the 25! Atlanta’s defense has been on the field for more than 40-minutes. They’re clearly exhausted, they’re on their heels, they’ve got nothing left. Just run it up the middle and win the game. Just run the ball. They did that on second down. But because they attempted a pass on first down, they almost didn’t get the chance.

Back to the Falcons choking away the game.

Atlanta’s up by eight points and they’re at the New England 22-yard-line with 4:40 to play in the game. That’s a 39-yard field goal to go up two scores. If you run the ball straight up the gut three times in a row, then kick the points, you’re got an eleven-point lead with less than two minutes to play. The only thing you absolutely cannot do is go backwards 23 yards!

So they lose one yard on the first run. And then they panic. Ryan attempts a pass and he’s trapped for a 13-yard sack. Then another pass play with a ten yard holding penalty. Then the punt. Then the loss. If they run the ball, they win the game. Instead, they tried passing. And they lost. They went for the mile when an inch would have won the championship.

Like Pete Carroll and the Seahawks two years ago. Just run the ball and win the game.

Don’t give me what we heard from the Atlanta coaches and players last night: “That’s not our offense. We’re always looking to move the ball downfield and score points. We weren’t trying to squeak out a three-point win, we’re trying to play our style, play our game.”

Knowing how to close out a game, how to milk the clock and kick a championship clinching field goal, should probably be added somewhere next year in the Falcons’ playbook.

For my money, with a nod to Turbo Tax’s Humpty Dumpty and T-Mobile’s Martha Stewart and Snoop Dogg ads, my three favorite commercials from last night were Skittles, Busch Beer, and the Intel ad featuring Tom Brady. When he snatched that dropped pancake off the floor and away from his dog…