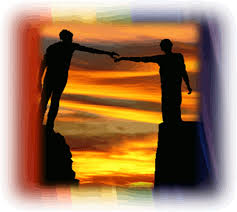 “I plead with Euodia and I plead with Syntyche to agree with each other in the Lord.” ~Philippians 4:2

When Paul begs those two ladies in Philippi to put aside their differences and put their relationship back together for the sake of the church there and its witness to the community, he does not expect them to kiss and make up on purely human grounds. The only way it’s going to happen is if it happens “in the Lord.” Their agreement must be “in the Lord.” Because when people are “in the Lord,” surprising things happen.

Every time Paul tells the Philippians to do something “in the Lord,” it’s something that goes totally opposite of what most people would normally do. It’s a surprising action that goes against human nature and only makes sense “in the Lord.”

Paul’s writing this letter from prison. He’s in jail for preaching the Gospel. He’s awaiting a trial that may result in his execution. Naturally, all this trouble is driving all the other Gospel preachers away. It’s causing all the disciples of Jesus to go into hiding. It’s forcing them to tone down the message. No! Surprise! Just the opposite!

“Because of my chains, most of the brothers in the Lord have been encouraged to speak the word of God more courageously and fearlessly!” ~Philippians 1:14

Paul’s chained to a Praetorian guard. He’s got little support financially or otherwise. He doesn’t know if he’s going to live or die. So, naturally, he pours what little money and resources he has into his criminal defense. He surrounds himself with friends and family. He wants them to be close to him, to comfort him, to take care of him. No! Surprise! Just the opposite! He’s sending his friends back to Philippi to take care of the Christians there. His concern is only for them.

“And I am confident in the Lord that I myself will come soon.” ~Philippians 2:24

Epaphroditus is sent by the Philippian church to take care of Paul. They collected the money, they paid for his trip, they put all their trust and faith in him to carry out this official mission. But he changed his mind. He got sick and he’s coming home. He’s leaving Paul in Rome and heading back. So, naturally, Paul says, “Do what you want to with this guy. You should have chosen somebody else. He’s been no help to me.” No! Surprise! Just the opposite!

“Welcome him in the Lord with great joy and honor men like him.” ~Philippians 2:29

Those who live under the Lordship of Christ are different. People who are in the Lord are motivated by different things. We’re pushed to act in surprising ways.

Whatever humility, sacrifice, and service was needed to fix our relationship with God, Jesus did it. Willingly. Eagerly. Obediently.

Remember that love and sacrifice, Euodia. Remember that mercy and grace and forgiveness, Syntyche. And put it into practice with one another. In the Lord.