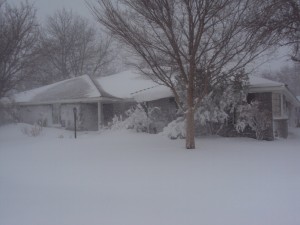 It’s almost noon Monday, there are thirteen-plus inches of snow on the ground, 36-plus-inch drifts here and there around our house, and it’s still coming! Sideways! It’s supposed to keep snowing until maybe 5:00 or 6:00 this evening, and the winds are still supposed to be blowing at a sustained 40-45 miles per hour with gusts of 50-55 miles per hour until Tuesday night. The National Weather Service “Blizzard Warning” remains in effect for all of Amarillo until 3:00 tomorrow morning. And we are stuck. I mean stuck big time. We’re not going anywhere today and maybe not even tomorrow. 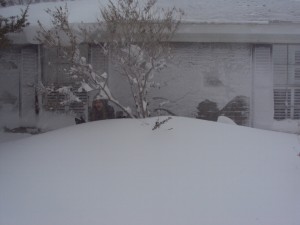 We knew something was happening. They had issued the Blizzard Warning late Saturday afternoon. But when we walked out of Ruby T’s after church at 1:00 yesterday, the skies were clear, the sun was shining, winds were calm, and it was 65-degrees. Carrie-Anne and Valerie went to the store to grab a few things for small group and came home reporting long lines, huge crowds, empty shelves, and near chaos of apocalyptic proportions. It was like Russia near the end of the Cold War. The front hit about an hour later and it snowed a little bit between 6:00 and 7:00. But when we left the Bentleys’ house at about 8:00 it was all gone. No snow.

Until 10:00. That’s when it really started pouring. And it hasn’t let up since. 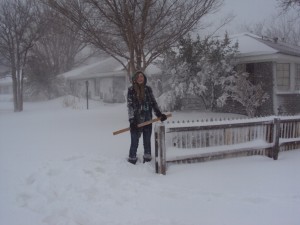 We had just settled in to watch the news and Carrie-Anne spotted it first. I wasn’t really looking for it, I wasn’t expecting it. But she saw it on the little crawl at the bottom of the TV screen. “Did that say Amarillo ISD?” I rewound the beginning of the local news a couple of clicks on the back button (Thank you, DVR!) and oh, my word, there it was! Amarillo ISD classes canceled along with almost every other school district in the tri-state area.

Those of you reading this post from outside the panhandle don’t fully appreciate the magnitude of this development. I really didn’t, either, until I had exchanged a few texts with Kim, a local principal here and a great friend of ours from Central. Yes, we’re in the middle of only our second winter up here, and, yes, we’ve only experienced a couple of bad snows. But school has not been canceled one time for weather. Not for a seven-inch snow last year and not for a three or four inch snow two weeks ago. According to Kim, this is only the second time in the past forty years (!!!) that Amarillo ISD has cancelled classes for snow the night before the actual event. Whoa.

After Doppler Dave and Prowlin’ Allan and all the other local weather men assured us that, yeah, this one’s going to be for real, I made the decision to head back up to the church building and get all my stuff for Wednesday night’s class and next Sunday’s class and sermon. Just in case. I had about a half mile visibility to and from the church building. And I was the only one on I-40. I didn’t see any other vehicles the whole way there and back. By the time I got home at 11:00, it was on. For real. 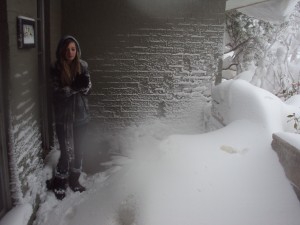 We stayed up another hour or so watching the snow pour down. We went to sleep with the consistent howl of the north winds as a background track and woke up this morning to snow like I’ve never seen in my life. Three and four foot drifts and snow blowing so hard I couldn’t see our back fence from the back door. The snow plows weren’t even running because of zero visibility. This is a real-deal blizzard! All the highways are completely closed: I-40 in and out of Amarillo is shut down; I-27 between Amarillo and Lubbock is closed both ways; 287 is also closed both ways. There’s no getting in or out. Some of the drifting in the middle of our alley and down Roxton is 24-inches deep. I couldn’t get anywhere in this if I wanted to. 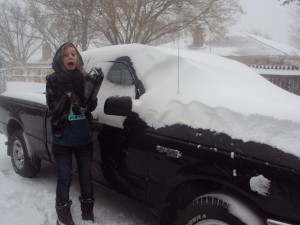 Carley and I were the only ones to brave the outdoors this morning. The other three women in the house are enjoying the blizzard wrapped up in blankets on the couches watching “Fried Green Tomatoes.” Wimps. So my youngest daughter and I bundled up and explored the property, plowing through almost waist high drifts, marveling at the cool snow sculptures shaped by the wind around our eaves and fences, and taking a lot of measurements and pictures.

We’re going to do a little more of that later today, maybe after lunch. There’s a big pot of chicken and dumplings on the stove and, once we’re sufficiently warmed back up, Carley and I will get back outside.

All my appointments and meetings have been canceled for today and tomorrow and we really are stuck here at the house. 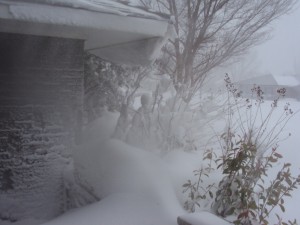 I can’t imagine that anything will happen until Wednesday or Thursday. It really is a mess out there. My sister, Rhonda, told me this morning that I’d better watch it or I’ll start feeling like Jack Nicholson in “The Shining.” So, you might pay attention to my blog. If I write, “All work and no play makes Allan a dull boy” over and over again, call somebody.