It’s Tuesday. Feels like Monday. Tomorrow’s Wednesday. And I’m running behind. We concluded our “Marriage Matters” sermon series on Sunday with “Sex and Marriage.” I’d like to reproduce a lot of that sermon in a series of three or four posts here in this space, but it’s probably not going to happen this week. Stay tuned.

In the meantime, let me share a couple of links with you.

Erica Grieder has written a column in the current Texas Monthly about the San Antonio Spurs, claiming that they are not only the best franchise in the NBA, but the best professional sports team in the history of the state of Texas. She makes a pretty good case and she taunts Cowboys fans with a parenthetical “Prove me wrong!” You can read her column by clicking here.

Jim Martin has written an excellent post about being grateful on his blog “God Hungry.” As always, he makes a point that hurts: sometimes we say “Thank you” to everybody in our lives except the people we love the most. You can click here to read his post. 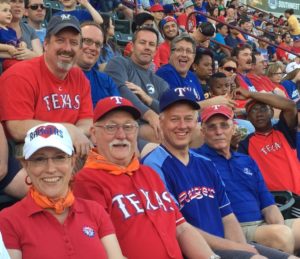 We took our annual Central Boys Night Out trip to the Ballpark in Arlington last Friday to see the home team get clobbered by the Pirates. Didn’t much matter; we had an absolute blast. Dale won the homerun pool, I took home the double-play pot, and Speck lucked into the final-out bucks. Lou went to his first big league game, Andy wore an orange bandana around his neck, and we made Greg wear an Adrian Beltre shirt. We also learned that if you’re a cop, like Doug, you don’t have to go through the security line like everybody else. On the way we saw where Bruce grew up in Quanah, and on the way back we quietly lamented the idiocy that would destroy the baseball temple in Arlington and rebuild it next door with a retractable roof. And we all ate for the cycle.