Savior of the World

After just a couple of hours with Jesus, the Samaritan woman at the well knew it. After just two days with him, the villagers of Sychar proclaimed it. The rarest of biblical titles for our King was declared unashamedly by the socially marginalized, the religious outcasts, the “sinners.”

How did they know? What did they experience that led them to this bold confession?

Jesus had purposefully put himself at great risk by going through Samaria in order to find this woman. He had crossed every barrier and cleared every obstacle; he had blown past the social and cultural walls, the political and economic hurdles, the religious and gender boundaries to reach this lonely and forgotten soul. He had refused to be bogged down in religious debate and questions of worship, instead focusing on his relationship with her. And he had exposed her great sin against God at high noon in the town square — and graciously and powerfully forgiven her.

Without partiality, without prejudice, without compromise, Jesus is the true light who goes into the darkness to rescue the whole world. The scars you’ve suffered, the fences you’ve erected, the sins you’ve committed — none of this registers as even a speed bump to the Savior of the World.

Once you realize it, how do you respond? Because you have to respond. Jesus is not going away. He sat down on the edge of the well, an unavoidable obstacle to the Samaritan woman. And to you. The woman, Scripture says dropped her jar, she left the well, and ran back into town to tell everyone about the Messiah. The town sleaze had become a Gospel preacher!

How do you respond to the Savior of the World? 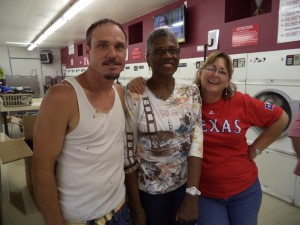 As part of our “Gifted 2 Go” series here at Central, our oldest daughter, Whitney, and I wound up with almost twenty others at Brock’s Laundry last night, about two blocks west of our church building. Armed with $300 dollars in quarters, our task was to pay for everybody’s washers and dryers for two hours. There are 25 dryers along the back wall at Brock’s and 50 washing machines arranged in the middle. And we had all 75 of those things spinning until after 8:30 last night. We met young families and single moms, one college-aged kid and a couple of older folks. We packed and unpacked machines, folded clothes into laundry baskets and cardboard boxes, playfully fighting over the limited number of dryers and laughing loudly together as we took over Brock’s and made it the center of attention at Washington and 14th.

We met John, who I think used to have some ties to Central but refused to elaborate. We visited with Berto and his wife and held their precious seven-month-old daughter, Leah, while they switched out washers and dryers. We talked to Tiffany who admitted to hating Amarillo and wanting to move to San Antonio to be closer to an aunt. Justin and Mallory had just had the back glass and side window of their car blown out by gunfire Monday night. Miranda wouldn’t stop thanking us. Another woman there, almost in tears, told Shelly that for the first time in more than a year, she and her husband were now going to be able to do laundry and put gas in his truck during the same week. A young man named Matthew surveyed the room while his jeans and T-shirts cycled and commented to Myrl, “Y’all must have an awesome church.” To which Myrl replied, “Well, we have an awesome God!” 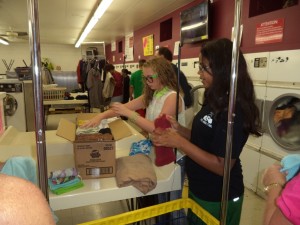 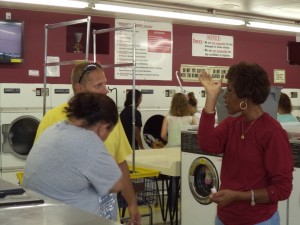 A block away, Lon and Jeff and their crew washed almost twenty cars while Bob and his group changed oil a block south in another fifteen or twenty vehicles.

At 9:00 last night, as we were loading up the leftover sodas and water bottles in the laundromat parking lot, I turned to Shelley and said, “That sure beats a boring Wednesday night Bible class, huh?” Shelly said, “Yes, sir! Not that there’s anything wrong with our Bible classes, but THIS is what we’re supposed to be doing!”

We’re making inroads into our community. Slowly but surely, steady and purposefully, we’re meeting our neighbors and blessing them with the love and grace of our Lord. We’re seeking relationship. We’re meeting people where they are. We’re giving the cup of water, the handful of quarters, in the name of our King. And trusting him to use us to his eternal glory and praise.