We’re finally home now from a ten day family vacation to Orlando, Florida  and back. We put 3,384 miles on the Town & Country and I feel like we did most of it yesterday. I’m very, very glad to be home. We all are. Orlando is great, but there’s not a Dr Pepper to be found there. I knew the Magic Kingdom had a contract with Coke. But so does Universal Studios and, apparently, the entire Central Florida region. It is not the happiest place on earth.

We managed to survive four straight days of Universal theme parks and theme rides and theme restaurants and theme shops. On the way home yesterday we dropped Valerie off at OC for Camp Zenith with all her Legacy friends and made it back just in time to deliver Carley to her “Missions In Amarillo” event here at Central. Now, it’s time to get caught up on this blog. Bear with me, I’ll try to do this in a couple of days.

I want to post a few pictures from our Running the Race kickoff at Central two Wednesday nights ago. I know, these pictures are already old. But, really, this is the first chance I’ve had to even think about posting them since that evening.

We crammed Sneed Hall for the enchilada dinner; we even had to bring in extra tables and chairs. The “Running the Race” headbands were a big hit as surprise door prizes. As always, just click on the pictures for the full size. Copy and use them at your own discretion. 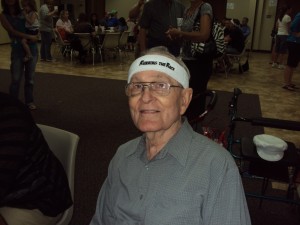 I don’t have any pictures of the actual worship time in the chapel. There are lots of those pictures out there. I can report that the chapel was packed. It was buzzing with energy and excitement. It was loud with kids. And the singing was magnificent. Whoa, the singing was good.

Following our worship time, we all headed out to the field behind the Upreach Center for some intergenerational races. Greg and his crew did a great job of organizing four different events in which we all competed in pairs for gold, silver, and bronze medals. In order to foster some of that intergenerational interaction, the rule was that there had to be at least a 20-year age difference between teammates. And it worked! 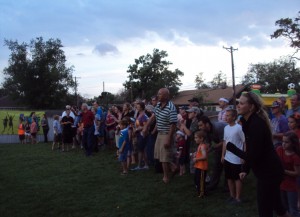 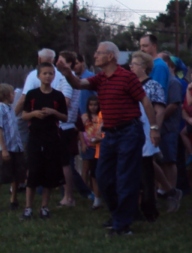 Josh Dowell and I took the bronze medal in the game’s opening event, a race in which Josh ran the width of the field, did seven circles with his forehead pressed against an upright baseball bat, staggered back to where he blew up and tied a balloon. My job was to sit on the balloon and pop it. Which I did. Nobody blacked out or hyperventilated. Which is a surprise.

Don Evans and I qualified for the medal round in the three-legged-sack race. But, due to some awkward moments at the turn, which, thankfully, all occurred inside the sack and out of sight, we finished fifth. Carley and Shannon actually took the gold in that event. Alas, it would be the last medal of the night for the Stanglins.

Jonah and I didn’t even come close in the golf ball toss. And Leon dropped and broke our water balloon on just the fourth throw into the evening’s final event. He blamed a hangnail or something on his “catching hand.” We’re putting him on the 15-day DL.

It was just the beginning of what promises to be a wonderful summer of exploring and enriching the tremendous blessing God has given us in having a church family made up of five full generations. You know, some churches are made up of only two or three generations. We’ve been blessed with five! And from here on out we resolve together to never take that blessing for granted; we promise to use it to our Father’s glory and to impact all of Amarillo for the sake of his great name; and we intend to enjoy it more and more.