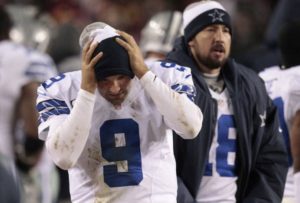 According to my research — I’ve spent about 15-minutes on this — there’s only one quarterback in the history of the NFL who started for the same team for as many consecutive seasons as Tony Romo without winning a single divisional playoff game.

Romo has been in Dallas for 13 seasons, the starting quarterback for the Cowboys the last eleven of those seasons — ten if you don’t count 2016 because he actually never played a down. Regardless of how you count this past year for him, he stands with only one other quarterback in league history in the category of longevity-plus-playoff-failure.

Danny White was the starter for eight years in Dallas and led the Cowboys to three straight NFC Championship Games. By the way, only five of those years was full time  — he split starts with Gary Hogeboom and Steve Pelluer his last three seasons — because White couldn’t get the team to the Super Bowl. Don Meredith was under center for seven consecutive seasons and took Dallas to two NFL league championship games. But he was run out of town because he couldn’t win the big one. Romo hasn’t even won a medium-sized one! But, as we figured out a long time ago, Jerry Wayne is making plenty of money and seems to be perfectly fine with a mediocre team.

Jim Hart played nine years for the Cardinals and never won a playoff game. Matt Stafford just completed his eighth year in Detroit without a playoff victory. Philip Rivers has been in San Diego for eleven years, but he’s taken the Chargers to an AFC Championship Game.

Archie Manning is the only guy I can find who played for the same team as long as Romo played for Dallas without a divisional playoff victory. Manning started for ten seasons in New Orleans, never once qualifying for the playoffs.

Help me. Is there somebody I’m missing? Is Romo’s situation truly this rare?

I’m not blaming Tony Romo exclusively. It’s not all his fault that he’s the first quarterback in the past thirty-one years and only the second in NFL history to play ten years for one team and never win a divisional playoff game. A lot of this is on Jerry.