Forty years ago this summer the Texxas World Music Festival, more commonly known as the Texxas Jam, brought together eleven bands — Van Halen, Aerosmith, Ted Nugent, Heart, Journey, and Eddie Money among them — to perform in the first of what became the largest and longest running outdoor concert series in world history. The Texxas Jam ran for eleven years at the historic Cotton Bowl and I was there on the 120-degree floor of that stadium with over 100,000 people for the final four.

The Texxas Jam is where I learned to love rock and roll concerts. It’s where I first saw The Motor City Madman swing from a cable onto the stage wearing nothing but a loin cloth and totally command the stadium for over an hour. It’s where I saw Bon Jovi perform at 11:00 in the morning when their only hit was “Runaway.” I was there when Deep Purple did “Smoke on the Water” and Boston played every cut from their “Third Stage” album in order. I saw Sammy Hagar completely lose his voice and Van Halen’s bass player Michael Anthony step up and sing Led Zeppelin’s “Rock and Roll.” I saw Eddie play “Eruption.” Live. Twice. The Scorpions, Night Ranger, and Loverboy. Bachman Turner Overdrive, Whitesnake, and Poison.

The concerts are legendary. Heat strokes and fire hoses. Surprise appearances by Nugent and Hagar. The Eagles protesting weather conditions and the rough accommodations for an hour before finally taking the stage. Blown amps and stolen guitars. Fifteen hours of wall-to-wall rock and roll from some of the biggest bands in music history. There was nothing like it before and nothing like it since.

So, I was immediately interested when a chat box popped up on the sidebar of my KZEW – Vokal screen a few weeks ago advertising a 40th anniversary Texxas Jam Tribute concert at the Texas Music Museum in Irving. It was being billed as a two-day event with Texxas Jam memorabilia, documentaries, guitar contests, and several tribute bands playing the actual sets from those famous concerts. I contacted my brother Keith in Austin and we quickly decided we would buy our tickets and meet in Dallas to experience the event together. 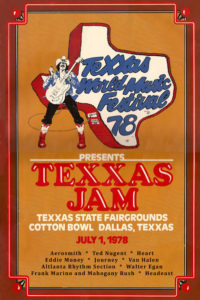 Then the venue changed to the Longhorn Ballroom in downtown Dallas. It went from a two-day event to a one-day deal. The Heart tribute band cancelled. I contacted the promoter by email and he assured me everything was good. Their website promised “more surprises,” which gave me a great deal of pause, but the tickets were purchased, the plans had been made, and we pressed on.

We showed up Saturday at just after 12:00 noon. There were only eight or nine cars in the parking lot. And it was way too quiet. And weird. No documentaries. No memorabilia. No crowd. Keith and I felt like we had crashed a Vokal staff party. We were the only ones there who weren’t working for the show or related to members of the bands. The MC came over to us and introduced himself personally — we stood out that much! The MC was never certain of the lineup. He read fun facts about the Longhorn Ballroom from a page he printed off the internet. They thanked sponsors and touted the food truck and jewelry booth like we were at a small town arts and crafts fair. And nobody showed up.

Seven guys participated in the Eddie Van Halen guitar-playing contest which was basically a showcase of seven different ways to get into and out of “Eruption.” At one point one of the contestants flicked his guitar pick at us in the audience and it was so quiet in there we heard the pick hit the wood floor! It bounced within about 24-inches of my feet and nobody made a move.  That pick just laid there on the floor for almost a minute before somebody to my right mercifully walked over to retrieve it. After they announced the winner, with all seven contestants still standing on the stage, the MC said “Hopefully we’ll do this again next year and it’ll be better.” Seriously.

During the Joan Jett tribute concert the band dropped the instruments and mics for the audience to sing the chorus to “I Love Rock and Roll!” and it was dead silence. It was incredible! The first words the MC said after the Joan Jett show were, “Now back to the tamales,” referencing the food truck he was talking about before the set.

We were took. Big time. I feel like a huge sucker. The promoter tried to make up to us  by giving us free replica concert posters from the inaugural ’78 Jam. I took one and, yeah, it’s hanging up in my garage right now.

I made the drive and spent the time and money because I wanted to see the documentaries and the memorabilia. I wanted to be reminded of some of those really fun and free and wild moments from my youth, I guess. I wanted to watch the interviews and hear the stories and see the history. The last thing I would have ever done is drive more than six-hours one way to listen to some cover bands. Give me a break.

But the bands were actually really good, especially the Van Halen and Whitesnake tribute bands, VHX and Sinners and Saints. I actually enjoyed it much more than I thought I would — it was quite a surprise. Their music was crisp and clean and to-the-note exactly like the studio sound of the records. The lead singers have worked a long time to perfect the look, the voice, the mannerisms, and the stage quirks of David Lee Roth and David Coverdale. If you squinted your eyes and let your imagination go just a bit, these guys looked and sounded just like the bands I saw in my youth. And, as Keith mentioned a couple of times, where else are you going to hear these great songs performed live like this? Van Halen will never sing “Ain’t Talkin’ ‘Bout Love” with that same lineup from ’78 – ’85. Whitesnake is not doing “Here I Go Again” with Coverdale. This is it.

And it worked. For a brief moment, as insanely lame as most of it was, it worked to remind us why we love electric guitars and a driving beat. It was not a totally wasted day.