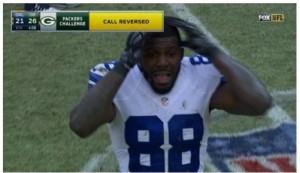 It could have gone either way. I think I could argue for an hour on either side of the call. According to the strict interpretation of the rule, it was an incomplete pass, but only if you determine that Bryant was in the act of falling down, and not in the act of stretching for the end zone. My regret, of course, is not that the Cowboys lost. Come on, what’s more fun than another crazy, punch-in-the-gut, let it get away, last second, I’ve never seen anything like that before, reversal of fortune loss for Dallas? It’s delicious. My regret is that it was determined by a video replay.

It would have been a whole lot more fun for Dallas to be awarded first and goal at the one yard line, as originally, humanly ruled on the field. The Cowboys score and then Aaron Rodgers has the ball with four minutes left to win the game for the Packers. On the field. Between the players. Either way it ends, that would have been a lot of fun. I regret that the video replay is so intrusive on the game. I appreciate that, much more often than not, the replays get it right and make things right that were wrong. But is the intrusive nature of the beast worth it? That controversial reversal determined the outcome of the game.

We all know replay isn’t definitive. It’s not always right. It’s actually quite subjective. So, again, is it worth it?

We’ll never know. We’ve all swallowed the lie that because we have the technology we must use the technology. For most people in most all circumstances now, it’s some kind of moral sin to choose not to use the technology that’s available. And, yeah, that’s regrettable on many fronts. There were 22 football players on the field, hundreds of players and coaches and media on the sidelines, and thousands of fans in the stands. Not one person thought Bryant didn’t catch that pass. Only a couple of people in New York who watched it in ultra slow motion from four different angles considered it incomplete. Only after making the very subjective call that the receiver was falling, and not lunging for the goal line.

As video killed the radio star, replay is taking the human element right out of our football games.

That’s the regrettable part. Not that the Cowboys lost.