Congratulations to the Dallas Cowboys.  Seriously.

The 31-14 blowout of the Bucs was the very last thing I expected to see last night. Yes, I figured the Cowboys had a 50-50 shot of winning their first playoff game on the road in 30 years against a bad Tampa team that entered the postseason with a losing record. I expected them to win it or lose it in a tight game in the 20s, say 27-23, something like that.  I wouldn’t have been surprised by a back and forth barn burner in the 40s or by a modest 13-6 score, either. But Dallas’ total domination last night was shocking, and they deserve a lot of credit from the coaches to every player on the team not named Maher.

Tampa Bay is not good. We know that. Still, that should not take away from what the Cowboys accomplished. They played a perfect game against the scheduled opponent. Flawless.

Coming off arguably his worst career game in D.C. last week, Dak Prescott turned in an all-time beauty last night with four passing TDs and one running on a spectacular 4th down bootleg. At one point, Prescott led the Cowboys on four straight scoring drives. He threw no interceptions and he completed balls to every receiver. Tony Pollard opened things up with his tough running. The defense put constant pressure on Brady, batted away every other pass he threw, and totally shut down the Bucs’ running game.  No turnovers for Dallas and they only committed two penalties.

And they officially retired Tom Brady. Didn’t they? Didn’t Dallas last night finally put Tom Brady out of his misery? And ours? 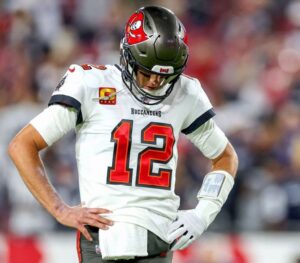 Brady did not want to be out there last night. His facial expressions, his body language, his posture – all of it looked like a guy who had ended up in a neighborhood he didn’t recognize. He didn’t want to play, he wanted to get out of there. He didn’t want to get hit, so he took one step away from the pressure and drilled the ball into the ground. Like a dozen times. He wasn’t scrambling to make a play as much as he was getting rid of the ball so as to get off the field without getting hurt. It was clear he didn’t want to be out there and he had no intention of doing anything extra or special to try to win. He just wanted it to be over.

And it is, right? Dak has never looked as good as he looked last night and Brady has never looked as bad. Never. Tom Brady looked like a third-string QB on crack. He underthrew, overthrew, and threw behind his receivers all night. He attempted 66 passes and most of them were ugly. He was out of sync, out of rhythm with his receivers, and out of sorts all the way around. And out of time. It’s over. Right?

If you had an NFL team that was really good on both sides of the ball and all you needed was a quarterback to take you to that next level, would you call Brady? Not me. He’s done. Finally.

Brett Maher missing an NFL record four PATs was my glimmer of hope last night. Certainly those historic misses would turn out to be a deciding factor. The Cowboys always lose playoff games in the strangest way imaginable. It’s always something you’ve never seen before, something that drops your jaw and defies explanation and gets talked about for months. Like missing four extra points. The perfect script had the Cowboys losing by one point last night. Can you imagine? Of course you can, because things like that have happened to this team regularly for the past quarter century.

But not last night. The Cowboys were too good and the Bucs were dreadfully awful.

It won’t be the same thing in San Francisco on Sunday. The 49ers are the most dominant team in the NFL since November. They are on an eleven game winning streak and they are solid on both sides of the line. They will run the ball 35 times against Dallas, Brock Purdy will scramble away from pressure and make big plays against the Dallas secondary, and they will stuff Zeke and Pollard and show Dak defenses he’s never seen before. It’s a road game for the Cowboys, all the way to the West Coast, and on a short week. The string of consecutive seasons without a divisional playoff victory will extend to 27 years. And the Cowboys will lose Dan Quinn and make Kellen Moore an assistant head coach.

But that’s next week. For one day, the Cowboys deserve to celebrate a postseason road victory, the first one since before my 30-year-old daughter Whitney was born. 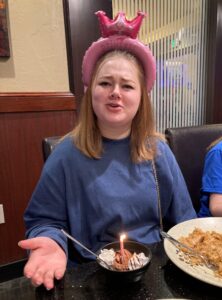 Our middle daughter Valerie flew in from Tulsa to spend almost a full week with us as we acclimate from Houston back to Stanglin Manor here at home. While she was here, we celebrated her birthday a little early with a Hibachi dinner at Hayashi – her call. Of course, she wore the cheesy inflatable pink princess crown when they brought out the birthday drums! Valerie helped with the cooking and cleaning, turned Carrie-Anne on to a couple of TV shows she’ll be streaming for the next several weeks, and provided a real emotional boost during this up-and-down time of transition. It’s always good having our Val Pal around.

We meet with the doctors at Texas Oncology here in Midland tomorrow to work out the game plan and finalize the time frame for Carrie-Anne’s chemotherapy. C-A was scheduled to return to work on February 9, but that may be the same week we start her infusions. We’ll see. They told us at  M.D. Anderson that this type of chemo isn’t the kind that knocks you out for a week. They say she’ll be able to go to work the day after each treatment. But, of course, everybody responds differently. We’ll see.