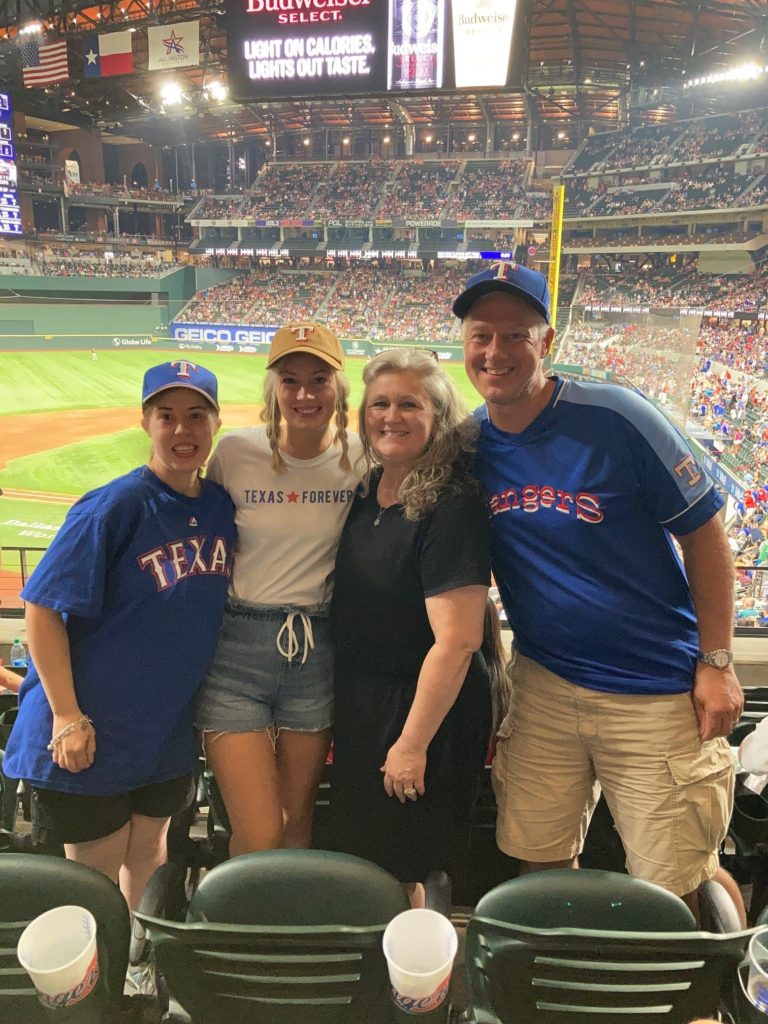 It’s not really baseball if it’s played inside a dome.

The girls and I took a quick five day vacation to a couple of our favorite places in Texas last week, wrapping it up with our first visit to the Rangers new ballpark in Arlington – the hideous dome they built to replace the most beautiful stadium in the state. It’s an awful thing. It looks like a massive airplane hangar. It looks like a gargantuan temporary metal building somebody erected over a weekend so they could sell knockoff Nikes or bootleg T-shirts. Situated directly across the street from the gorgeous Ballpark in Arlington, the contrast between the two venues is striking. And terribly sad. 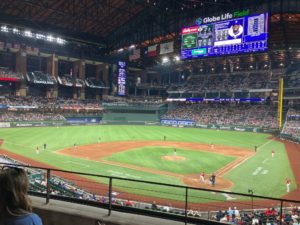 Yes, the seats are cushioned in the new place and, unlike with Jerry’s Death Star next door, they’re all a bit closer to the on-field action. And it’s cooler, of course. It was 94-degrees outside and 70-degrees inside. I wasn’t sweating. Carley reported feeling a bit chilly. Yes, it was very, very comfortable. But it didn’t feel like a baseball game. Walking around the concourse felt more like getting ready for a hockey or basketball game, or a concert, not a baseball game. Aren’t you supposed to be sweating your lips off at a Rangers game? Isn’t that part of what makes the Lemon Chill so great?

And no fireworks. It was a Friday night game, but you can’t do fireworks indoors.

But they still do the wave. I was hoping the new stadium would be wave-less. It’s not. New stadium, same wave-happy fans. 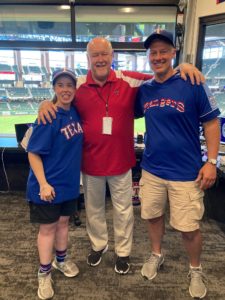 It turned out to be a really fun night. Before the game, I had the great joy of introducing Whitney to longtime Rangers Public Address Announcer Chuck Morgan. The inventor of the dot race. The voice of Arlington Stadium, the Ballpark, and now this Ranger Hangar. We met him in his PA booth right behind home plate and he autographed Whitney’s hat with his famous, “It’s baseball time in Texas!”

The Rangers went hitless through five innings but then scored three runs in an explosive sixth inning to beat the A’s 3-2. A good, clean, well-played baseball game. In a dome.

And they didn’t play Stevie Ray Vaughan’s “If the House is a-Rockin'” after the final out. I was puzzled by that. We lose the song but we keep the wave? Who made that call?

The rationale offered to the public for this abomination has been two-fold: that the summer heat wears the team out so they’re not as strong down the stretch of a baseball season and that more people will attend Rangers games if it’s more comfortable. These are loser arguments from a loser mentality. It’s so disappointing. My response continues to be 1) a winning organization uses the local weather to its benefit. You don’t see the Chicago Bears or the Green Bay Packers putting roofs on their stadiums. They wear short sleeves in sub-freezing blizzards and intimidate the opponent. The weather is part of the home field advantage for an outfit with a winner’s mindset. And 2) it’s not the weather keeping fans away, it’s the inferior on-field product. When the Rangers are winning the division and contending for the pennant, the stadium is packed even in 100-degree heat, even in 88% humidity. I don’t care how cool it is inside the dome, nobody’s coming to watch a last place team.