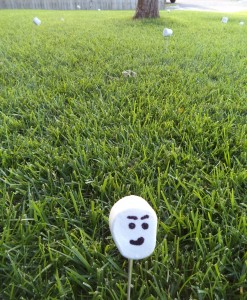 I don’t know yet who did it. I’m not certain. But I think I have a pretty good idea.

I thought maybe they were mushrooms at first. We’ve had an unusual amount of rain lately and it has been unseasonably cool. Are those mushrooms? No, those are marshmallows! Forty or fifty of those huge marshmallows in my lawn on little wooden stakes. Some of them had faces drawn on them with Sharpie. And they were facing the house. Creepy.

And a bunch of little plastic green army men stationed on the walkway leading up to our front porch. Advancing. Guns pointed at the house. A few of the men had made it as far as the flower box on the front porch itself. 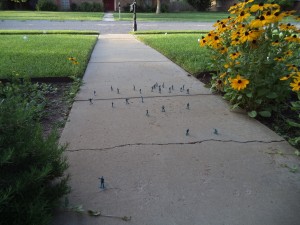 And a bunch of little glow-in-the-dark stars on the mailbox.

You and your partners in crime are now officially on notice. So are a couple of adults who are old enough to know better. Hannah? Aleisha? At 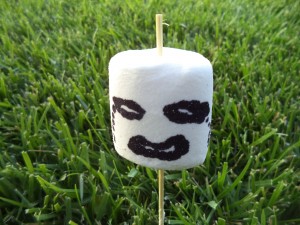 the very least, you two are wanted for questioning. But you silly little teenagers, be aware. I know where you live, I know what cars you drive, and I know where you’re going to be tonight.

Thank you. That is all for now.