Power Instead of Love

Scattershooting while wondering whatever happened to Bruce Huther…

Randy Harris says preaching a sermon is like landing an airplane: anytime you can walk away from it, it was good! Well, I had one of those really shaky moments on Sunday when a carefully prepared and meticulously rehearsed line came out wrong and, maybe, distracted from what I was trying to communicate.

In our look at the third desert temptation of Jesus in Matthew 4, I was going with the angle suggested by both Henri Nouwen and Eugene Peterson, that Jesus was being tempted to use impersonal power and force to rule the kingdoms of the world and their splendor instead of relational love and ministry. Power is the shortcut to love. Power is easy; love is hard. It’s easier to be God than to love God. It’s easier to control people than to love people. It’s easier to own the world than to love the world. Yeah, I was on a roll. But about a third of the way into the lesson, this is what came out of my mouth:

“Every single Christian believer has an important voice and a vital presence in the way this country is run and the way our culture is shaped. Yes, it’s critical for the redemption of creation. The world must see God’s children and know where we’re coming from and where we’re going. Yes. But, listen, we are deceived by the devil if we believe for one minute we can act or think or speak in ways that are contrary to or opposed to the ways Jesus acted and thinked and…”

And then I was stopped dead in my tracks. Thinked? Did I really just say “thinked?” I heard the giggles. I acknowledged the silly mistake with a crooked grin. “Thought!” I said. “The way Jesus acted and thought and spoke.” I confessed that I had worked for nearly two weeks on that line but had just butchered it. And we laughed. And then I continued preaching.

I had just about gotten over it when we walked into Rosa’s for lunch with what seemed like half our congregation. There at one of the biggest tables in the center of the restaurant was the Granado clan. All of them. When I walked over to say “hi” like all the good preachers do, Lonnie looked at me and said, “I thinked you might come to Rosa’s today!”

Valerie’s boyfriend made a wisecrack in Richard and Lori’s driveway Sunday night after small group. Something about he thinked it was time to go.

I’ve had a few requests for more information regarding the book I read from right after I destroyed that excellent line Sunday. It’s called “In the Name of Jesus,” written by Henri Nouwen, a Catholic priest and author who wrote a whole bunch of books on Christian leadership and discipleship based on the life and teachings of Jesus. “In the Name of Jesus” is a treatise on the desert temptations of Christ. And it’s excellent. It will challenge your views of Christ and culture and it’ll call you to a deeper following of our Lord. It’s a really short book, but, as with most of Nouwen’s works, every paragraph is packed with holy insight. As I told our congregation Sunday, you can read it in an afternoon and it’ll change your life. 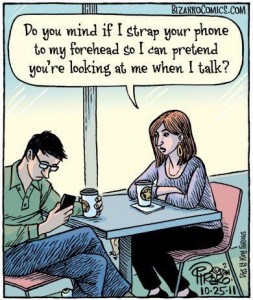 Please, please, please take two minutes to watch this video. Then, take another couple of minutes to let the shame and guilt wash completely over you. Don’t deny it. Don’t say the video is exaggerated or unrealistic. If that’s your reaction, I would point to that as proof that you’re spending way too much time looking at your phone and not being present in or paying attention to the place God’s put you. Then, please make a vow to leave your cell phone in your car when you meet friends for meals. Make a promise to never, ever take a cell phone into a business meeting or worship service. And resolve to never again take it out of your pocket and look at the screen unless the thing actually rings or buzzes. We know these phones are turning us in to a society of grunting morons. But we seem so thrilled about it.