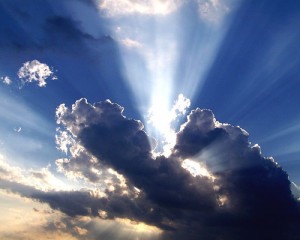 God chose David to be his king because he saw what was on the inside. God didn’t look at David’s age or his inexperience or his height or his looks. He looked at David’s heart and saw a man of faith and courage.

Once the Holy Spirit of God came upon David with power, the future king also began to view things differently.

When Goliath from Gath challenged God’s people in the Valley of Elah, Scripture paints a very stark contrast between David’s viewpoint and the viewpoint of the nation (1 Samuel 16:13). The Israelite troops are afraid of “this man,” while David sees the giant as nothing more than an “uncircumcised Philistine.” Saul’s soldiers say Goliath is coming out to “defy Israel.” But David sees it as much bigger. He says the enemy is “defying the armies of the living God!”

David sees the opposition to God for what it is. And he clearly sees the victory of God over that opposition. What scares and paralyzes the Israelite soldiers actually steels David’s resolve and motivates him to act in faith.

David never doubted God’s deliverance. Because God always delivers. We should all feel so deeply and act so boldly. And when the odds are stacked against us, it shouldn’t cause us to fear. We know that’s exactly when God does his best work.