Peace Through His Blood 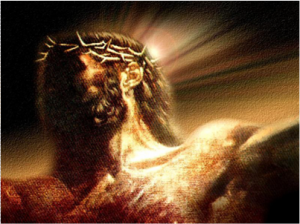 “God was pleased to have all his fullness dwell in him, and through him to reconcile to himself all things, whether things on earth or things in heaven, by making peace through his blood, shed on the cross.” ~Colossians 1:19-20

The creator and sustainer of the universe is our crucified Lord. We know our Savior as a human being. He became a man. Christ Jesus’ supremacy and lordship over all things is rooted in and finds its greatest expression in his salvation acts. His service. His sacrifice. His death. The head of the Church is the one who was shamefully crucified. And our Lord endured this, he obediently walked to the cross, not to judge or destroy, but to reconcile and renew. To make peace.

Jesus is proclaimed the eternal King of All when he takes up that cursed tree.

“He is not like a king who preserves his majesty and honor only by shutting himself up in the splendor of his palace, safely isolated from the misery of the poor peasants and the threat of his enemies outside the fortress. His majesty is a majesty of a love so great that he leaves the palace and the royal trappings to live among his subjects as one of them, sharing their condition even at the risk of vulnerability to the attack of his enemies. If we want to find this King, we will find him among the weak and lowly, his genuine majesty both revealed and hidden in his choosing to share their vulnerability, suffering, guilt, and powerlessness.”

God sends the creator of the universe not in fear and terror, but in gentleness and meekness. He sends him saving and persuading, not ordering and directing. Jesus comes to us calling, not commanding. Loving, not judging. And all of that is what saves us. His blessed birth, his wonderful life, his miraculous healings, his wise teachings, his compassionate care for others, his obedient suffering, his sacrificial death, his glorious resurrection, and his eternal exaltation — that is what saves us. It redeems us. It reconciles all of creation back to the one who created it and sustains it. And it’s beautiful.

He shared our life. He experienced our suffering. He bore our sin. Those of us who are members of Christ’s Body, the Church over which he is head, find our sins already canceled by his death. And we find the dominion of darkness and sin with all its power and authority already defeated.

“When you were dead in your sins and in the uncircumcision of your sinful nature, God made you alive with Christ. He forgave all our sins, having canceled the written code with its regulations, that was against us and that stood opposed to us; he took it away, nailing it to the cross. And having disarmed the powers and authorities, he made a public spectacle of them, triumphing over them by the cross.” ~Colossians 2:13-15