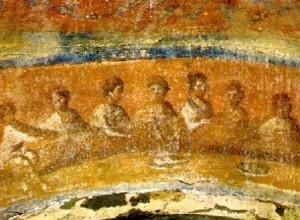 Jesus is at a fancy dinner party in Luke 14. He’s dining in the home of a “prominent Pharisee.” Fancy people in their fancy clothes telling fancy stories about their sophisticated lives. Scripture says Jesus is “being carefully watched.” Jesus notices and heals a sick man. Then he uses the sick man as sort of a sermon illustration:

“When you give a luncheon or dinner, do not invite your friends, your brothers or relatives, or your rich neighbors; if you do, they may invite you back and so you will be repaid. But when you give a banquet, invite the poor, the crippled, the lame, the blind, and you will be blessed.”

And then, I’m assuming, there was a long period of some really awkward silence. You don’t just walk into a fancy dinner party with lots of fancy people and tell the host and the guests that they’re doing it all wrong. “Why would Jesus tell us to invite losers to our parties?” You can almost hear a nervous cough. Imagine the sound of a lonely fork scraping against a dinner plate. Things are really awkward.

Finally, in order the break the tense silence, some guy blurts out, “Blessed is the man who will eat at the feast in the Kingdom of God!”

And Jesus immediately begins telling another story about another feast, but with the same guest list: the poor, crippled, blind, and lame.

Jesus is making the point — and he made this same point every day of his ministry — that the Kingdom of God is a big party with a bunch of losers you wouldn’t be caught dead with on a Saturday night. This is God’s idea of a great time. God takes a bunch of losers, he fixes them, and then he breaks out the roast beef and wine. Revelation says we’re all going to eat and drink with Jesus forever. We’re going to take our places around the table with him at the wedding supper of the Lamb.

What we do when we come together on Sundays is a warm up. It’s party practice. It’s like the chips and hot sauce before the fajitas and enchiladas. It’s at these dinner parties in the Gospels where Jesus shows us what the world looks like when it’s fully healed. When everything is finished, when the Kingdom has finally come in all its fullness, when all of creation is finally redeemed and restored to its original Garden of Eden intentions, it’ll be like this. Our Christian gatherings on Sundays anticipate that huge wedding bash. We’re getting ready for the massive celebration, not just on Sundays, but for all eternity. For all of us.

Isn’t it cool that the Church’s number-one liturgical act is practiced around a supper table? The Lord’s Supper. His meal. And we’re all invited. All us losers have a seat at the head table with the risen Lord of the Universe. A salvation party with a bunch of sickos. Again, that’s God’s idea of a really good time. And Jesus showed it to us all the time.