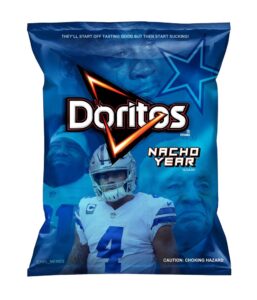 Scattershooting while basking in the glow of one of the more delicious Cowboys playoff losses in quite some time.

Back on September 9, I wrote in this space: After the Cowboys last loss of the year, “Jerry Jones will say this is the most disappointed he’s ever been in his professional life.”

On October 20, I wrote in this space: “The powers that be are right now devising the most excruciating, gut-punch way for the Cowboys to get humiliated in January. Again.”

On December 12, I wrote in this space: “The Cowboys have won the NFC East and will host a Wild Card playoff game. But it doesn’t matter. Dallas is not even in the same universe as the other playoff teams.”

When it happens every year for a quarter century, this stuff just writes itself. 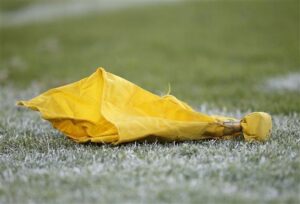 The Cowboys are sloppy. This team was the most penalized outfit in the NFL this season. No team has ever committed more penalties in a playoff game than the Cowboys committed yesterday: 14 penalties total, half of them of the pre-snap variety. No discipline. No focus. The penalties nullified big plays by the Cowboys and kept drives alive for the 49ers. This is not a new problem for Dallas. It’s been an issue all year and going back for several years. In my view, it’s a reflection of ownership and coaching. Since Jerry fired Jimmy and brought in Barry, there’s been an “anything goes” culture in the locker room, on the practice field, and during games. Players are not accountable to their coaches, they are accountable only to Jerry. They know it and the coaches know it. And it manifests in a lack of preparation and concentration on Sunday afternoons. 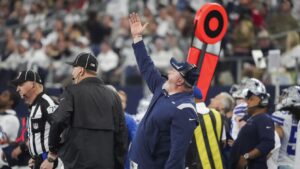 The Cowboys have a loser mentality. They blame the refs for all their losses. They’ve been doing it all year. They did it again last night. The coaches and players do not take responsibility for their own mistakes, blaming outside forces for their errors in judgment and focus. That umpire who bumped into Dak after the final play? He was doing his best to HELP Prescott and the Cowboys! If Dak had spiked the ball before the umpire spotted it, it wouldn’t have counted. It would have been an offensive penalty and the game would have ended. The umpire was attempting to help cover Dak’s mental lapse in a critical moment. He ran through Dak and the offensive line because it  was the quickest way to do it. He was trying to save it for Dak, trying to get Dak the last play he wanted. Blaming the umpire in that situation, which is what both McCarthy and Dak did after the game, is a loser response. 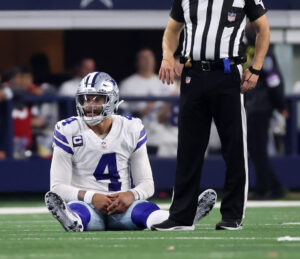 The delicious thing is that Dallas always loses in a way you never expect. It’s always something crazy and controversial, something you’ve never seen before, something that will be shown a million times and dissected and analyzed for months. When Dak took off on that quarterback sneak with 14-seconds left and no timeouts, you thought it was insane. I know you did. Every football fan in every living room and bar in America knew it was the wrong call, everybody knew it wasn’t going to work. Watching Dak run up the middle of the field while watching the clock run out was a truly surreal thing. Add the umpire bumping Dak while trying to officially spot the ball for the next play that wasn’t coming – I’ve never seen anything like it. And you haven’t either. Cowboys fans today are blaming the umpire and claiming that had Dak been given the opportunity to “clock it,” he would have thrown a 25-yard touchdown pass and Dallas would have won. Really? Yes, I know. And Dez caught it, too. Running the ball up the middle in that situation is an indefensible and absurd call. 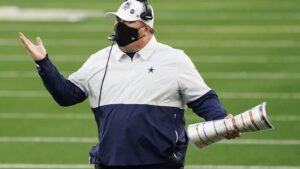 Mike McCarthy is not a good coach. His clock management and other in-game decisions are seemingly always a factor with this guy. Another glaring example yesterday was his decision to kick a field goal with twelve minutes left, changing it from a two score game to a two score game. The Cowboys went from needing two touchdowns to, after the field goal, still needing two touchdowns. Brilliant! Only the Cowboys can pull off a successful fake punt and get called for delay of game on the next play. Only the Cowboys would call a quarterback sneak with fourteen seconds left and no timeouts. If Dan Quinn and Kellen Moore both leave the Cowboys to take head coaching jobs elsewhere in the league, Dallas will be stuck with just McCarthy. My bet is that Jerry Wayne will keep Moore in Dallas by inking him to a contract that pays him more than McCarthy. Then, halfway through next season, Jerry will fire McCarthy and make Kellen the head coach and just Jason Garrett the Cowboys and their fans to death for the next decade. 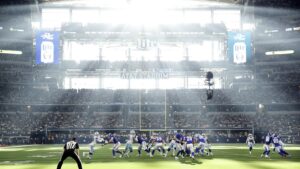 AT&T Stadium is the only football stadium in the history of football – junior high, high school, college, pro, the vibrating electric field you played with as a kid on the dining room table – that is situated east-west instead of north-south. It’s the only football stadium – ever! – that purposefully puts the late afternoon sun directly in the line of vision of the football players on the field. The west end zone is made entirely of  glass and Jerry Wayne refuses to admit his gargantuan error and cover it with large curtains or something that would fix the problem. Every year there are three or four games in which that ridiculous stadium configuration is a factor. Yesterday it was a wide open Cedric Wilson on third down, actually ducking his head when a perfectly thrown Prescott pass came his way because he couldn’t see anything. Jerry’s personal obstinance in this matter is one more example of why things aren’t going to change. 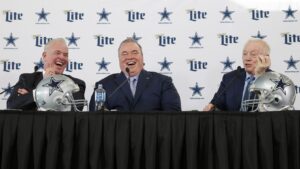 Nothing’s going to change. The Cowboys went 6-0 against the NFC East, the worst division in football. They went 6-6 against the rest of the league. They lost a playoff game to a wild card team that did not win its own division. At home! They have the second highest paid quarterback in the NFL, the third highest paid running back, and the fourth highest paid receiver. They had the NFL’s top scoring offense and number one offense in yards. They’ve got the NFL defensive rookie of the year in Trevon Diggs and an MVP candidate in Micah Parsons. All that, and they’re not even close. The Cowboys were 13-3 in 2016 and lost the Wild Card game. They were 12-4 in 2014 and lost the Wild Card game. This is pretty much the story of the Cowboys for the past 26 years. What do you see that’s going to change the narrative?

There are six teams in the NFL that have not a won a divisional playoff game in 26 years. They are the Browns, Bengals, Deadskins, Dolphins, Lions, and Cowboys. Dallas is not just one player or one coach or one lucky break away from the Super Bowl. They are the Lions and Browns.