It’s been announced today that they’re putting Harriet Tubman on the twenty dollar bill. I would have put Beltre on it, but whatever. 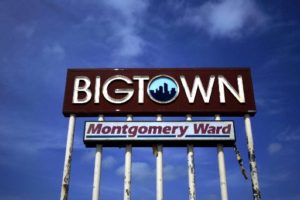 In other news, FedEx has announced they are building a 334,000 square foot regional distribution center on the site of the old Big Town Mall. That means it’s probably too late to return that birthday shirt my grandmother bought at Montgomery Ward.

When it opened in 1959, Big Town Mall was the first and only indoor shopping center in the whole state of Texas. Located right where I-30 and Highway 80 intersect, where southeast Dallas meets Mesquite, it was a marvel in its time and a staple of my childhood and growing up years. Big Town was where I first visited Santa Claus. Driving home with the family from our grandparents’ house in Fort Worth, the iconic Big Town water tower was the landmark sign that we were almost home. I remember my aunt LouAnn telling me stories about teenagers climbing that tower to steal the red lights off the top. I can’t remember if it was her or some other source that told me a teenager had committed suicide by climbing the Big Town water tower and jumping off. Maybe just an urban legend. And there was the huge super slide we all raced down on top of old feed sacks. I remember a rumor, too, that a rattlesnake had once crawled out of one of those sacks, biting a kid and killing him. Again, probably just an urban legend. When I gave friends directions to my house I always started with “Take the Big Town exit.” 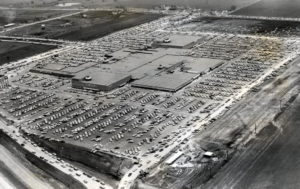 Big Town Mall had the wide polished floors and walkways that led to and from the staples of the retail world at that time: Woolworth, Montgomery Ward, J. C. Penny, and Sanger Brothers (before Sanger-Harris). There were lots of huge potted plants and a big fountain. There was a movie theater, a bowling alley, and an arcade. I remember being intrigued by the arcade but never being allowed to go in. I remember the mall was air-conditioned!

It officially closed sometime in the early 2000s, just a couple of years after my grandmother died. In 2005, the government used the Big Town mall to house refugees from Hurricane Katrina. And then they demolished the whole thing in 2006. It’s gone. It has been for ten years. The sign is still there. I think the water tower is, too. It’s still Big Town Boulevard that runs from the highway south until it becomes Prairie Creek Lane. The memories are still there, too. And I might still have probably somewhere a hideous, too-small, too bright, too-colorful, too-puffy sweater from the ’80s with the Montgomery Ward tags still attached. Oh, well. She only paid $3.49 for it anyway.