Nothing Not as Old as the NT

“Nothing ought to be received into the faith or worship of the church; or be made a term of communion amongst Christians, that is not as old as the New Testament.” ~Declaration and Address, Thomas Campbell, 1809 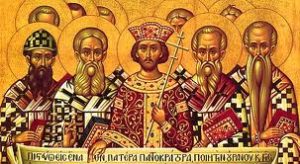 Our Stone-Campbell Movement was motivated by the desire to unite all Christians around the Bible only. The belief was that if we put aside all human doctrines and all human creeds and traditions and focused only as the Scriptures as our model and guide, all followers of Jesus would come together in one unified body. The ideal was to “restore” the New Testament church and for all of us to be New Testament Christians. One of the unfortunate consequences of this powerful vision has been our reluctance to embrace any church history or tradition before 1809. We ignore church history. We resist it, reject it.

My brother, Dr. Keith Stanglin, wrote an insightful article for the Christian Studies theological journal a couple of years ago that outlined a couple of key consequences that have resulted from our faithful pursuit of a New Testament Church ideal. The article is titled “Restorationism and Church History: Strange Bedfellows?” and you can read it in its entirety by clicking here. I’ll be using his article as a guide for this discussion that may take us through the remainder of this week.

The italicized statement at the top of this post is from the founding document of our Restoration Movement, Thomas Campbell’s Declaration and Address. This is proposition five, stated right after proposition four which said only the commands and ordinances of the New Testament will be binding on the church. Just as proposition four marginalizes the Old Testament, this proposition five marginalizes all church history. As Keith writes (or am I supposed to say, “as Stanglin writes?” This is kinda weird), “According to this rule, just as we should not consult Mosaic faith or tabernacle worship in the restoration project, neither should we consult Nicene faith or its liturgy.”

OK. Clearly, there’s a lot to consider here. Let’s just take this one step, one day, at a time.

“Nothing not as old as the New Testament” is a problem.

First, let’s consider what Keith calls the problem of logic. Receiving nothing into the church that is not as old as the New Testament is a self-contradictory statement. The rule doesn’t even meet its own criterion. People say things like this all the time: “There is no such thing as absolute truth” and “You should only believe statements that can be empirically proven.” Each of those statements fails to stand up to its own requirements. The same thing is true for Campbell’s rule that has had, and continues to have, a powerful influence on our Stone-Campbell churches. The statement itself is not as old as the New Testament!

See where this takes us? The whole thing is a consistency issue. We can’t hold to Campbell’s rule, we certainly can’t impose it on our churches, if we’re going to use a 66-book canon of Scripture as our rule and guide. As Keith writes, “It is for similar reasons that we also cannot give anything more than passing consideration to slogans such as ‘No creed but Christ,’ and ‘No creed but the Bible.’ Whatever these slogans and the [statement] possess in rhetorical force they lack in coherence and meaning.”

I say all this to just lay a foundation for the discussion that will follow tomorrow and the next day or days. We’re not making any conclusions here yet. I’m certainly not disparaging Campbell’s inspiring and God-ordained vision for uniting all disciples of Jesus together as one universal body of believers. It’s not only a noble ideal, it’s the will of our crucified and risen Lord. The suggestion is this: maybe our churches should at least listen to the wisdom of the Christian believers through the ages. I’m not saying we should blindly adhere to everything that’s gone before. I’m not suggesting we ought to swallow everything that’s been believed before and obey everything that’s been practiced before. But I believe we should probably let the “church fathers and mothers, the medieval scholastics and mystics, the reformers and restorers all have a seat at the table. It means hearing the voice of the past with discernment. It means having a ‘critical reverence’ for the historic Christian tradition.”

We have traditionally ignored or flat-out rejected most church history as formative for us in any way. We typically view all church history before 1809 as corrupt men and women practicing faithless apostasy and dividing Christ’s body with scandalous squabbles over insignificant issues. As Keith observes, whether we invite them to the table or not, we are all strongly influenced and shaped by ancient church tradition and history. Whether we acknowledge it or not.