Not Of This World 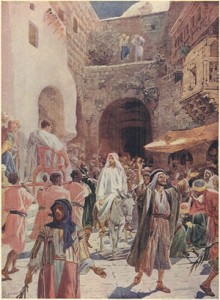 So why do we keep wanting to use the world’s ways and methods and forms?

If we’re going to think and talk and act this way, we might as well start waving palm branches like the crowds in Jerusalem who wanted Jesus to overthrow the Roman oppressors and establish an earthly kingdom in Jerusalem. Those people wanted to use Jesus for a political revolt. They wanted national and social and economic revolution in the name of the Messiah. They wanted Roman blood to flow in the streets. Gird your loins and grab your swords! God bless Israel!

Jesus will never be President of the U.S.A.

One, because he’s not running. Two, because you wouldn’t vote for him if he were running.

Think about Jesus’ platform. Sell everything you have and give it to the poor! Love your enemies! If Jesus had bumper stickers on the back of the donkey he rode into Jerusalem they would say “Be Last!” 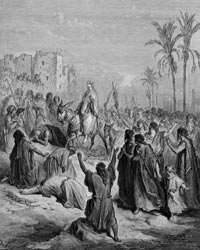 Of course, our King doesn’t come with T-shirts and stickers and buttons and hundred million dollar campaigns. He doesn’t save the world with armies and markets and policies. He saves the world through sacrificial love and suffering and service and grace.

Yes, Jesus came to be King. But instead of being crowned with a gold-plated headdress of jewels, he was crowned with painful and penetrating thorns. He did not bear a warrior’s sword or a royal scepter; he was beaten with a whip and a rod. Instead of sitting on a cusioned throne and ruling, Jesus hung on a tree and died. Jesus willingly, deliberately, goes to his own suffering and death for the sake of the world.

If we follow this King as his subjects — and we do! — then we, too, will follow him into Jerusalem to the place of suffering and sacrifice and death. We will say ‘no’ to status and position and glory and wealth and say ‘yes’ to the giving of our own lives. We will reject power and violence and force and accept God’s will and God’s way even in the midst of terrible personal agony. We will refuse to consider our own needs and, instead, be much more concerned with the needs of those around us.

That’s what it means to follow Jesus. To watch him and imitate him. To determine to be right behind him no matter where he goes.