It must be really weird to have every reporter on every network and satellite TV station and every columnist in every American newspaper calling for your retirement, even speaking of your retirement as if it’s a foregone conclusion, as if doing anything other than retiring would be an act of sheer lunacy. It must be strange to win a Super Bowl, to achieve the highest pinnacle of your profession, and before the confetti all hits the ground to hear your own co-workers speak publicly on national television as if you’ve already moved on. It must be odd to read your own obituary.

Yes, in my head I believe Peyton Manning should probably retire from the NFL. Old age (he’s 39?!!?), neck surgeries, and the accumulated football mileage are compelling reasons on their own. Add to that list the fact that he just won his second Super Bowl trophy, that he has now become only the twelfth quarterback in history to win multiple Super Bowls, and the first and only to do it with two different franchises, and it’s a no-brainer.

But doesn’t it seem strange to talk about it as if it’s already happened? To talk about it while he’s standing right there beside you? It’s almost like we want to get rid of him. “He won the Super Bowl! Great! He deserves to go out that way! It’s perfect for him to end his career this way!”

“He doesn’t have the arm strength he once did. He can’t move like he used to. He was the lowest rated quarterback in the NFL during the regular season. He can’t make the plays anymore. He needs to retire and, now that he’s won the Super Bowl, he can do it with dignity.”

I wonder if Peyton doesn’t just feel weird about everyone assuming his retirement, I wonder if he resents it.

What if Manning meets with his doctors in a few weeks and they tell him he’s completely healed? What if he has a really good couple of months here — physically, emotionally, psychologically? What if he believes in his heart he can study the film and tweak some mechanics and work extra hard and start for some team in the NFL next year that’s just one good quarterback away from competing for the Super Bowl? If he put in the time and did the work and some team wanted him to start for them, would we be opposed to that? Would it take away from Peyton’s dignity? What if he believed in the team in Denver and loved his teammates in Denver and wanted to practice the all-for-one team philosophy he’s talked and walked during his entire career and agreed to backup and mentor Osweiler or whoever else they bring in to start? Would we like him any less? Would that mean he had less dignity?

The stats say Manning didn’t have a great game last night. His numbers are a little less than average. They’re probably the worst numbers of any Super Bowl winning quarterback in the past thirty years, if not in all of Super Bowl history (I’d have to look up Trent Dilfer). His passes seemed to float. I’m not sure he ever threw deep. Didn’t Denver go a dozen drives in a row without a first down? So we say, “Peyton obviously doesn’t have it anymore. It’s good that they won the Super Bowl so now he can retire.”

Wait. How do you measure what Peyton Manning brings to that Broncos locker room, what he brings to the huddle, what his experience and his football brilliance bring to the field immediately before and immediately after every snap? I’m not making an argument for Denver to sign Manning as their starting quarterback for next year. But I am thinking we probably should all take a deep breath and tap the brakes a little bit on his riding off into the sunset. Slow down. What’s the rush? Are we that eager to lose Manning so we can replace him with more Cam Newtons? Why are we in such a hurry to trade Manning for a Manziel or Kaepernick or Bradford? Can we just enjoy what we witnessed last night for a week or two first?

It was fitting. It was good. It was unexpected and, in a football kind of way, strangely poetic. Manning’s gracious and self-deprecating responses to every question last night should be savored. His hard work and dedication to being the best version of himself for his teammates in the biggest game of their lives should be appreciated. The standup way he speaks well of others, the way he doles out credit to everyone around him, the gratitude he expresses at every turn, should be noted and celebrated.

Yes, Manning is probably going to announce his retirement in the next couple of months. But, why is everybody in such a hurry? 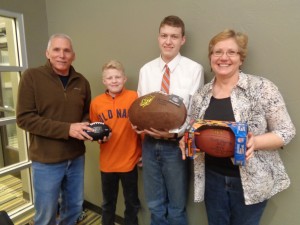 Congratulations to Perri Harper, the winner of our Jars/Jericho Bible Class Super Bowl Sweepstakes. Perri chose/guessed correctly on 29 of the 50 proposition bets all of us considered before kickoff. The contest gives just as much weight to knowing if Lady Gaga will wear short sleeves or long sleeves while singing the national anthem and whether the first commercial after the second half kickoff will be for Doritos or beer as it does to knowing if a two-point conversion will be attempted and who will be the leading rusher. Perri becomes the first female to take home the Bentley Trophy, where it will probably sit on a shelf next to Perri and Clay’s Central New Members of the Year Award from 2014. For the record, Connor Landon finished with 27 points while his brother Braden and Bruce Tidmore tied for third with 26.