Lucky To Be Among Them

“In a good friendship each member often feels humility towards the rest. He sees that they are splendid and counts himself lucky to be among them.” ~C. S. Lewis, The Four Loves 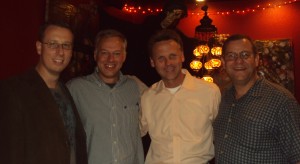 The first weekend in March is sacred. It is holy time, set apart for divine purposes. The first weekend in March is when my three greatest friends and I get together for our annual campout. Jason, Dan, and Kevin and I — The Four Horsemen — will not be kept from our yearly gathering. Neither freezing rain nor sleet nor snow nor record lows nor historic drought nor wild animals nor major surgeries will deter us. Not even one of us moving away to Amarillo will keep us from coming together for 36 hours of food, fellowship, encouragement, funny pranks, wild boasts, daring feats, prayer, spiritual conversation, and belly-splitting laughter.

It’s been a little over ten years since we committed to one another around my dining room table that morning in Mesquite. Weekly bible studies gave way to monthly lunches once we all moved away. And now that I’m in Amarillo, it looks like these campouts are the only regular thing we can count on together. We began this sacred tradition in 2006 in Cleburne, froze our backsides off around the lake in Waco the following year, and have spent the past four campouts in a row at Tyler State Park. For this, our seventh annual Four Horsemen Advance (we never retreat!), we moved things back down to Waco where an elder at Jason’s church, the stately Ray Vannoy (“Papa Ray;” roll your ‘r’) has a tract of land just west of town in Speegle.

Dan always sets our itinerary which revolves completely around the food. Jason always determines in what order we pray. But Dan always picks the restaurants and the menu. As soon as my plane landed at Love Field, the Horseman Advance began with a gigantic breakfast at Lucky’s, apparantly one of Kevin’s favorite spots. Jason had a mild restroom encounter there that amused our table. But my encounter with our waiter near the end of our meal (“You can thank me later”) proved to be equally upsetting and hilarious. A drive to Waco isn’t complete without a quick detour to the Czech Stop in West for some kolaches and cookies. We impulsed bought $118 worth of groceries for dinner at the Waco Wal-Mart. Brisket and jalapeno sausage and “gut-packs” for lunch at Vitek’s BBQ. And a wonderful steak dinner cooked over the open fire at the campsite.

Like all our campouts, this one provided a few adrenaline rush moments of daring and adventure. We felt downright apostolic Friday night when not once, but twice, snakes crawled out of the firewood and began writhing at our feet. Jason felt the only biblical thing to do was to crush them with our heels. Since we all have four different opinions about the controversial ending of the Gospel of Mark, we followed Jason’s lead and stomped the snakes instead of picking them up. We fought a little field mouse to a draw: the tiny creature was in need of an eye patch after we got through with him; but we slept restlessly in the fear and knowledge that he was still around. There was also the constant threat of skunk, although an actual sighting was never confirmed. Dan almost threw out his shoulder tossing the football fifty yards against the wind. And Kevin almost undid his back surgery halfway up the brush pile.

In and around and during all that, we talked. And listened. We reflected and reacted. A lot has happened since last year’s Horseman Advance. A lot. Kevin got married and had major back surgery. Dan’s father-in-law, a great friend of his actually, who had lived with Dan and Debbie for more than a dozen years, passed away. Jason moved to Tyler where he’s now preaching at the West Erwin Church of Christ. My family and I moved here to Amarillo. And our Father has been faithful and good and loving and kind through it all. He has carried us. He has blessed us. He has provided and protected, forgiven and restored, over and over and over again.

The greatest blessing through our ups and downs, in our victories and defeats, with our blessings and our trials, is in our friendships with one another. There is mutual encouragement, honest accountability, thoughtful guidance, and unconditional loyalty and love. Kevin blesses me so much with the way he thinks. He forces me to look at things in ways I would never consider if left on my own. Dan blesses me so much with his vision and his heart for people. He makes me think higher and bigger, he makes me dig deeper and wider, he calls me the way my Lord calls me, always attaining to the ideal. Jason blesses me with his faithfulness. He is faithful. Faithful. Faithful. To me. To his wife and kids. To his friends. To his Lord. I can’t imagine ever knowing a more faithful man. He inspires me.

We prayed for one another’s families. We lifted up one another’s churches and elders. We prayed about one another’s ministries and relationships with God. We hugged. We cried. We affirmed our love and loyalty to one another in Christ Jesus, our risen King. And then we quickly changed the subject to baseball. Afterall, we are men; and we were out in the woods. We hit Chuy’s for fajitas on the way out of town Saturday afternoon and that was it. We just waved at the Czeck Stop on the way back to Dallas. Although it was on Dan’s itinerary, there just wasn’t room.

These are the three greatest friends any person could ever hope for. And they are mine. I praise God for these men. And I count myself lucky — no, blessed; blessed by God —  just to be among them.