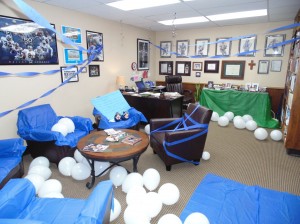 We need to probably revisit the policy here at Central that gives all the ministers and administrative assistants keyed access to all the offices.

I walked in to my study early Saturday morning to discover that the whole room had been desecrated with the metallic blue and silver of Jerry Wayne’s Dallas Cowboys. Blue streamers and silver stars criss-crossing the ceiling, blue plastic on the floors and the chairs, Cowboys pom poms on the printer, little tiny blue stars glitter in my chair and on my phone and SPRINKLED ALL OVER MY STUDY BIBLE! A few dozen balloons, a pair of Cowboys slippers with a funny note, and a large posterboard declaring my allegiance to the football team in Arlington. 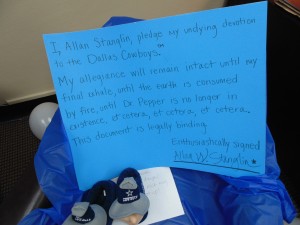 Now, I can appreciate a clever prank. I love a good joke. The more creative and surprising, the better. And this one was pretty good. What topped it off, though, and made it almost borderline genius were the dozens and dozens of little pictures of my head taped to all the pictures of the Cowboys players on the walls. These perpetrators were not content to just paste my face to my existing décor. They came in with their own doctored up photos and plastered them all over the walls, too. Some of these were downright hilarious. A couple of them were almost creepy. But it was all really, really funny Saturday morning. 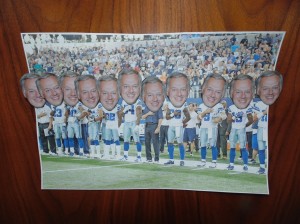 However, I am now finding little tiny blue stars everywhere. Everywhere. I thought I had cleaned all of them off my phone. But at 1:45 this afternoon, fifteen minutes before Ralph Hill’s funeral in the chapel, I’m leaving a meeting in Greg’s office when Mary starts laughing and pointing at my left ear. A little blue glitter star right there in my ear! I’m glad she caught it before the funeral; I’m not sure how I would have explained that. Knowing one of the pranksters and her style, I’m certain I’ll be finding little pictures of my face and little blue stars in weird places in this office for the next several months. 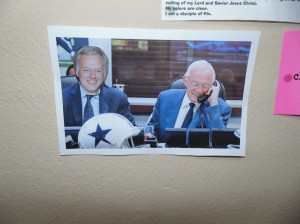 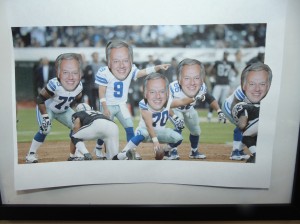 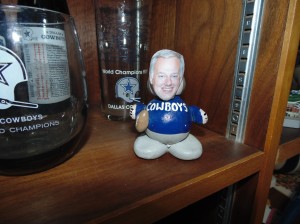 Now, how do I get this tiny blue star out of the USB port on this laptop?