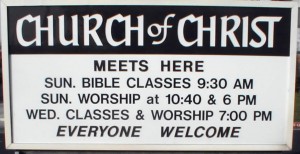 As we review and reflect together on Leroy Garrett’s book, “What Must the Church of Christ Do to Be Saved?” we arrive today at the author’s 17th suggestion for avoiding “obscurantism, obsolescence, and irrelevance” in this increasingly post-denominational, post-Christian world. In order for us to remain a viable voice for Christ, in order to retain any credibility as a faithful witness to his redemption work, Garrett says we must appeal to the wisdom and insights of those who went before us.

Heed the principles set forth by Barton W. Stone.

Alexander Campbell’s group of restoration churches and the restoration churches that followed the teachings of Stone realized fairly early on that they had enough in common by the blood of Christ and by their devotion to our Lord’s plea for the unity of all God’s children that they should join together as one movement. So these Churches of Christ, Christian Churches, and Disciples of Christ Churches — nobody was worried about the actual name of the congregations at this early point — officially came together to worship, to work, and to spread the Good News. It eventually became known as the Stone-Campbell Movement. And it was during this time of coming together, in 1832, in the midst of the drama and trauma of the official union, that Stone wrote his “An Address to the Churches of Christ.” Stone’s purpose in writing this document was to head off at the pass a few problems that were already impacting this infant coalition of congregations. And Garrett says we should look back to that document for wisdom as we deal with our own doctrinal and unity differences today.

Early on in the Address [Stone] warned against unwritten creeds, which he considered more dangerous than written ones. The purpose of both, he noted, “is to exclude from fellowship the man who dissents from them.” He observes that there are those who clamor against (written) creeds and yet have creeds (unwritten) of their own, and they are as intolerant toward those who dissent from their creeds as those who make written creeds are toward their dissenters.

What pain we would have avoided had the wisdom of this pioneer reached our ears. With ne’er a (written) creed in sight we have been creed-makers, and, like Stone said, we have used them to draw lines on each other and to exclude one another from fellowship. We have made creeds of our opinions, whether in reference to theories like millennialism, questions such as marriage and divorce, or methods like instrumental music or Sunday schools. It is of course appropriate for each of us to follow his own conviction in reference to any of these, but it is not all right to make a creed out of them. Creed-making makes parties, whether they be written or unwritten creeds, and that is what lies behind all our divisions.

Garrett points to Stone’s conviction that the gift of God’s Holy Spirit is “the crowning blessing of all blessings” and the most important part of being a Christian. Stone wrote that the gift of the Spirit is “more necessary” than faith, reformation, and immersion. And he did not emphasize the importance of a particular method of baptism. It’s easy enough to admit that both of these ideas seem to fly in the face of where we are now as Churches of Christ. Honestly, we probably under-emphasize the Holy Spirit and over-emphasize the method of baptism.

But that’s probably OK. The point Stone was trying to make then and that Garrett is trying to make now is that Christians may differ on any number of things without dividing. Stone and Campbell managed it quite well for more than two generations.

[Stone] referred to two differences  between their churches at this time, which troubled people on both sides. The Campbell people placed greater emphasis upon immersion for remission of sins than the Stone churches, and the Campbell churches broke bread every first day while the Stone people didn’t.

This diversity of doctrine and practice led Stone to emphasize what had characterized the Movement from the outset: “We who profess to stand upon the Bible alone, and contend that opinions of truth should not be made terms of fellowship — shall we be intolerant towards each other because we may differ in our opinions? Forbid it, Heaven!”

Here Stone is telling us what we must do to be saved. We must cease and desist from making our own interpretation of what we believe to be truth (an opinion, Stone calls it) a test of fellowshipo. And he says this includes such matters as the design of baptism and the frequency of the Lord’s Supper.

Stone went on to say what should be proclaimed in every Church of Christ in the land today: “If you think your brother in error, labor in the spirit of love and meekness to convince him; but imposing zeal against him will only harden him against any good impression you would make. It will probably stir up strife and ultimately destroy love, the bond of union.”

We must repent of our ugly, sectarian past and resolve to follow Stone’s  advice when he went on to say in his Address to us, the Churches of Christ: “A little longer forbearance with each others’ weakness, and truth will triumph!”

I would personally point to Romans 14:1-15:7 here to remind you of the Biblical foundation for everything Stone wrote on the matter of differing opinions and unity and everything Garrett writes against imposing on other Christians the lines we draw for ourselves. But there’s no need. You already know what the passage says, right?