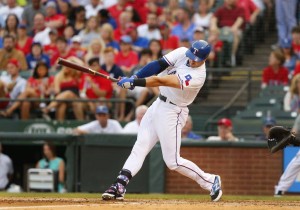 Where were you the night Joey Gallo made his dramatic major league debut with the Texas Rangers? It might not matter. Even if you were glued to the TV screen last night as the 21-year-old went 3-4 with a majestic homer and four RBIs, you might not remember it ten years from now. I couldn’t tell you where I was or what I was doing when Ruben Sierra, Pudge Rodriguez, or Juan Gonzales made their debuts with the Rangers.

Gallo was on his way to AAA Round Rock on Monday when the Rangers called and asked him to keep his apartment in Frisco. Due to Adrian Beltre’s jammed thumb suffered in Sunday’s walk-off win, the team needed to expedite Gallo’s journey to the majors and called him up to start at third base Tuesday. And Gallo delivered.

A sharply hit two-run single in his first ever major league at-bat. A towering two-run homer into the second deck in his second at-bat. Even more important, a hard-earned walk in the 8th inning after a quick strikeout in the 6th. Gallo’s on-demand curtain call at the Ballpark came well before he finished one triple shy of hitting for the cycle. He makes the Rangers must-see-TV right now. He’s part of a very young, very talented, very confident group of kids the Rangers are riding to win eleven of their past thirteen games. And they’re suddenly fun to watch. 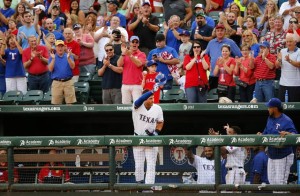 The 6’5″ slugger has a lot of strike zone to cover at the plate. I’m not sure a guy that big can work as much ground as is needed at the hot corner at third. I don’t know how long it’ll take major league pitchers to figure him out. I do know he’s not going to go 3-4 with 4 RBIs every night. Before this is over, he’s going to struggle. Two weeks from now, we might all agree that Jon Daniels’ plan to ship Gallo back to Round Rock when Beltre is healthy is the right one.

But we’ve all seen enough to know he’s the real deal. He’s going to be a home-grown, drafted-and-developed superstar for this club in the tradition of Sierra and Pudge and Juando for many years. More than likely, he’ll play the bulk of this year with the Express, get called up to Arlington again in September, and then join the big club for good at the beginning of 2016. Probably. And if the powerful lefty lives up to expectations, if he plays a long and successful career with the Rangers and makes a bunch of All-Star games and delivers a couple of pennants, the legend of last night will be told and re-told so many times you’ll feel like you saw it live. And you might even tell people you did.