Moving our oldest daughter to a new city and a new high school two weeks before the start of her senior year was the most difficult of many difficult parts of our decision to relocate our preaching ministry to Amarillo. We agonized over that part of it. We prayed about it and discussed at length the dozens of pros and cons. We were told the Huddles here at Central would help.

As it turns out, the Huddle leaders for this senior class, Jason and Kasey Love, have been a gracious answer to our prayers. 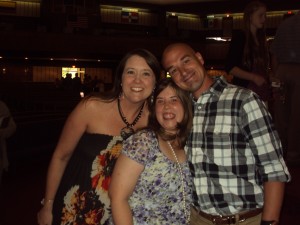 Jason and Kasey contacted us the week it was announced that we were moving to Amarillo to talk to us about Whitney. Within a week of our arrival here, Carrie-Anne and I were eating lunch with Jason and Kasey at Jorge’s. They promised us they would welcome Whitney into this already well-established group with open arms. And they did. Whitney spent every Wednesday night and countless Sunday afternoons at Jason and Kasey’s. Praying and singing with these twelve other seniors; playing and laughing, eating and sharing, watching movies and decorating brooms, studying and growing together in the name and the manner of our Lord. Jason and Kasey loved Whitney like they had known her for ten years. And, certainly because of their great leadership, the other kids in the group did, too.

Taylor and Barrett trash talked sports with her. Alyssa and Kristel cared for her. They all treated Whitney like one of their own. And before too long, she was. 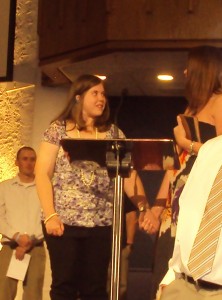 It meant so much to her mom and me to listen to Whitney during our Senior Sunday ceremonies yesterday here at Central thanking her youth ministers, thanking her fellow classmates, thanking other individuals in our church family for loving her and supporting her in this transition. She thanked us, too. But her words for Adam and Missy and Tanner and Jason and Kasey seemed to matter more. It meant so much for Kasey to meet Whitney at the podium, to hug her like she did, to grab her hand, and speak those precious words of blessing to our first born. It meant the world for Kasey to read those jewels from Psalm 9 to my daughter in front of our whole church family:

“The Lord is a refuge for the oppressed,
a stronghold in times of trouble.
Those who know your name will trust in you,
for you, Lord, have never forsaken those who seek you.”

Thank you, Jason and Kasey, for the love you gave to Whitney. Thank you for sharing your house and your food and your sweet kids with our daughter. Thank you for pouring your lives into her, for selflessly giving your time and energy to her, for showing her what it looks like to consider the needs of others more important than your own. Thank you for being that answer to a parent’s prayers for his girl.

Last night’s Senior Banquet was the perfect ending to a wonderful day. As is the tradition here at Central, each senior’s family decorates that honoree’s table for the dinner. So, Carrie-Anne and Valerie went all out with an over-the-top Texas Rangers theme complete with Rangers balloons, Rangers pennants, Rangers plates and napkins, and Rangers 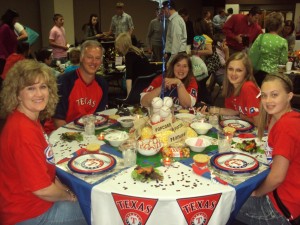 tickets for placecards. There were baseballs in a vase and boxes of Cracker Jack at our table, bags of peanuts and popcorn, little miniature apple pies, and even two bowls of Carrie-Anne’s famous Oreo balls decorated like baseballs. Thanks to Greg, we didn’t take any of the Oreo balls home.

What a night! We took such delight in meeting and getting to know everybody’s parents and grandparents and close friends. All of the tables were decorated magnificently. The brisket dinner was delicious. The service provided by the high school Juniors and their parents was excellent. The slide show was hilarious (and informative). And the entertainment was a roar.

The hired hypnotist cast his spell on Jason and Kasey and six of our seniors. And for almost two hours they entertained us in ways that they can’t ever understand, even after they watch all the video. Corbin falling flat on the floor before the hypnotist was even two minutes into his act. Barrett prancing around a little too naturally as Lady GaGa. Taylor milking that imaginary cow like there was no tomorrow. Jason almost breaking through the stage while he “played the drums.” Kasey forgetting her own name. Aaren jumping out of her chair. It was unforgettably funny and indescribably strange. My head ached from trying to figure it out while my stomach and my face hurt from laughing so hard.

Thank you to Tanner and Adam and Elaine and all the parents and volunteers who gave the Central seniors and their families an incredible day. We’re so blessed to be here with you. So very blessed.