Hula Hooping on the Wall at Applebee’s

It seems that Becky was eating with some friends at the Applebee’s on the loop in Lubbock when she strolled to the restroom and noticed a giant picture of a familiar gal hanging on the wall. Yes, that’s Carrie-Anne Stanglin, doing the hula hoop!

How did that picture get blown up and framed and hung on the wall at the Applebee’s in Lubbock?

We finally got a chance to see the picture first-hand Thursday night, but we still don’t have any idea how it got there.

Bruce and Celia Tidmore took us to the Garth Brooks concert at the United Supermarkets Arena on the Texas Tech campus Thursday. (Don’t talk trash to me about seeing Garth Brooks; I was going for my wife!) We left Amarillo early so Bruce could buy something he needed at Cabella’s. And before we made it over to Chuy’s for dinner, we swung by the Applebee’s to see Carrie-Anne’s portrait. And, yes, there it was! Big as Dallas! Right there on the wall next to the restroom doors! My wife, in our backyard in North Richland Hills, doing the hula hoop, eight years ago! 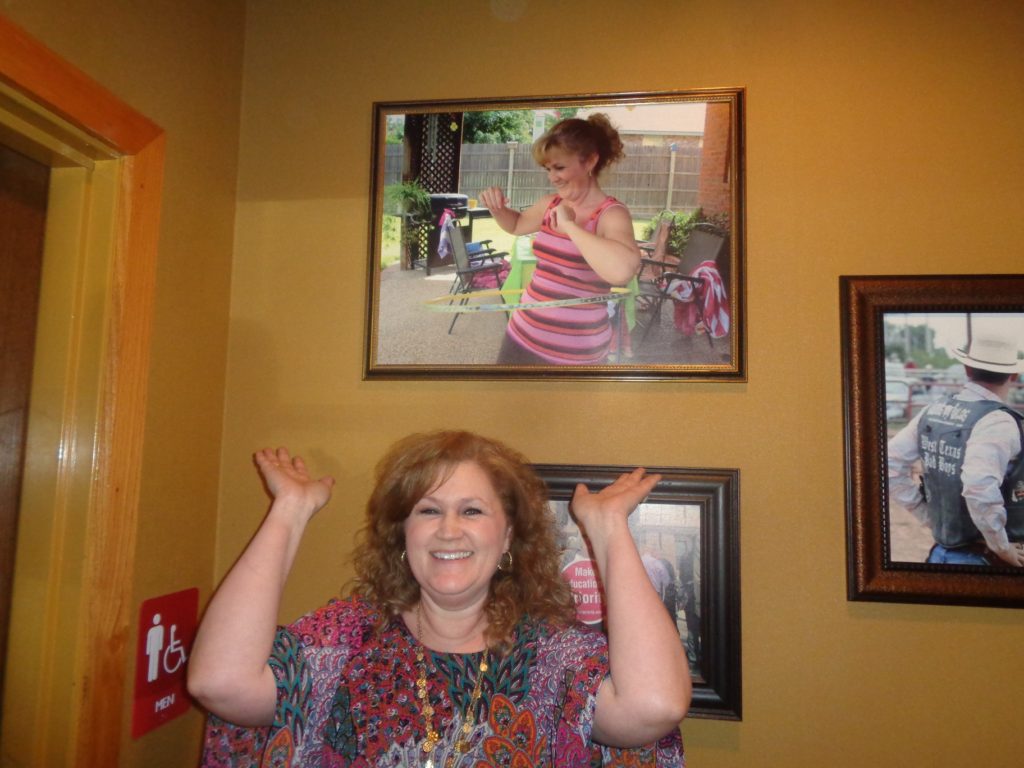 We took a bunch of pictures of C-A and the picture and marveled all over again at the complete randomness of the experience. The waiters and waitresses we queried had no idea how the picture got there. The manager told us that the store had gone through a remodeling two years ago and all the staff had been asked to submit pictures of Lubbock scenes and Lubbock people to use as decorations for their walls. Yeah, we could see, the walls were covered with pictures of Texas Tech and Red Raiders sports teams and buildings, oil wells, the Buddy Holly statue, the Lubbock rodeo, and several other Lubbock landmarks. And then this random picture of my wife! It didn’t match up with any other picture in the place! The manager had no idea who submitted the pictures and how they were selected — two years ago he was waiting tables at the Amarillo Applebee’s.

We came up with all kinds of conspiracy theories as we dined on shrimp chili rellenos and chicka-chicka-boom-boom at Chuy’s. But we don’t have any definite answers. It’s a mystery.

Anything like that ever happened to you? How random is this? How would you even search on my blog for that picture? You have to find the post and then click on a link within the text to even get to it!

For at least the next couple of years, Carrie-Anne is hula hooping on the wall at Applebee’s in Lubbock. And nobody can tell us how or why.

It’s Opening Day! Rangers and Tribe tonight at the Ballpark. Yu Darvish on the hill and — yuck — Joey Gallo at third. Opening Day! It should be a National Holiday. We treat it like one here at Central. Every year we wear our baseball jerseys and caps to work. Greg grills the dogs and brats, we eat Cracker Jack and peanuts, nachos and ice cream sandwiches. We open up and trade baseball cards. And we dream about future glory for our teams and lament the heartbreaking failures of the past. It’s Opening Day!

I’ve checked the standings. The Rangers are in first place.