How ‘Bout Them Cowboys?

The Dallas Cowboys are 136-136 since the end of the 1996 season. That was a long time ago, pardner. Since then, the Cowboys have had more players named Roy Williams than playoff wins. Since the Cowboys last played in a conference championship game, Derek Jeter was named AL Rookie of the Year. The Cowboys’ mathematically perfect 17-year run of mediocrity is not the most terrible news on the eve of the 2014 campaign. Tony Romo’s spinal column is being held together with duct tape and twisty ties. And his backup is Brandon Weeden. Last year’s third worst defense in NFL history is now without DeMarcus Ware and Jason Hatcher. The team’s best defensive player is out for the first four games with a drug suspension. And Jerry Jones having his picture taken with a couple of strippers is only 4th or 5th in a list of the terrible decisions he’s made since last year’s 8-8 finish. Should the Cowboys complete this season at 8-8, they will become the first team in NFL history to go .500 in four consecutive seasons. If the Cowboys go 8-8 this season, they should give Jason Garrett the Coach of the Year award.

I think the Cowboys will go 6-10 this season. Here’s how I see it playing out:

Sep. 7 v. San Francisco – Dallas has won two straight openers; but not this year. Scott Linehan, the Cowboys third different offensive coordinator in the past three years, calls DeMarco Murray’s number on 13 of their first 15 offensive plays. The Cowboys are 11-0 when Murray gets 20 or more carries. Oops. Make that 11-1. Murray nets only one run for a first down while Frank Gore runs for 125 yards and 2 TDs for the 49ers. Linebacker Sean Lee, watching from home and disgusted by the performance of the Dallas defense, gets up to change the channel and breaks his leg in three places. All the Dallas scoring comes from four Dan Bailey field goals. Dallas loses 35-12. 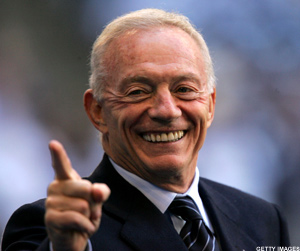 Sep. 14 @ Tennessee – Tony Romo throws for 299 yards, 161 of them to Dez Bryant, against the overmatched Titans secondary and the Cowboys win in a shootout, 41-38. Morris Claiborne gets burned for two touchdowns for the second week in a row and explains to reporters afterward, “Hey, at least I’m not doing steroids!” It looks like when Stephen Jones physically restrained his dad from drafting Johnny Manziel back in April will be the best defensive play made by any Cowboy all year. Romo says his back is just fine.

Sep. 28 v. New Orleans – Drew Brees brings the Cowboys back to reality by throwing for a record 516 yards and five TDs in a 53-10 rout on Sunday Night Football. Jimmy Graham has his way against the Cowboys defense, scoring on a reception, a run, a flea-flicker pass, and a drop-kick field goal on third down. Sean Lee, watching from the sidelines on crutches, trips over a headphone cord and tears his MCL. After the game, Rolando McClain retires. Again. He says he’s not in good enough shape to chase all those receivers down from behind. An optimistic Jason Garrett says, “We’re continuing to get better in certain areas each week. And our goal is to keep getting better in other areas each week.” Not even Tony Dungy on the post-game show has anything good to say about Dallas.

Oct. 5 v. Houston – Orlando Scandrick’s return to the Cowboys secondary can’t prevent the team’s second consecutive defeat, 27-13. The worst news, though, is the loss of quarterback Tony Romo. J. J. Watt and rookie Jadaveon Clowny make a Romo sandwich on a vicious sack in the second quarter, breaking Romo’s collarbone and Jerry Wayne’s heart. Backup Brandon Weeden came into the game — that’s like being in a sinking ship and discovering that the emergency life raft is a styrofoam Toot n Totem ice chest — and went 2-19 with two interceptions. Babe Laufenburg actually started warming up in the broadcast booth. Coach Jason Garrett says they’ll simplify the playbook for next week’s game at Seattle.

Oct. 12 @ Seattle – The Super Bowl champions demolish Dallas 38-17 and it wasn’t even that close. Brandon Weeden missed the first set of downs when he lost his way coming out of the visitors locker room. Dez Bryant stormed off the field with still more than four minutes to play. Cole Beasley took a selfie with Richard Sherman after the game. On the way home, Troy Aikman tells Joe Buck he’d rather do some of the divisional baseball playoff series than another Cowboys game this year. Jerry Wayne considers calling Quincy Carter.

Oct. 19 v. Giants – The Cowboys’ losing streak hits four in a division loss at home to New York. Eli Manning, who looks like the junior high kid who still has to use the safety round tip scissors in class, throws for three touchdowns. 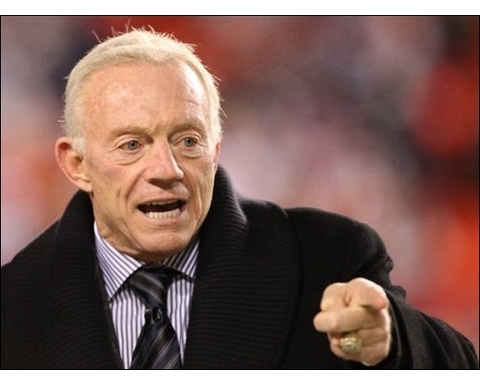 Oct. 27 v. Washington – In a secret agreement brokered by NFL commissioner Roger Goodell, Jerry Wayne brings Michael Sam off the practice squad and makes him a defensive starter four days before the nationally televised Sunday night game on ESPN. Goodell hopes the publicity surrounding the first openly gay NFL player will distract the media from the worldwide protests against the politically incorrect name of Daniel Snyder’s team. What he doesn’t realize is that it’s not the name “Redskins” that is offensive; it’s the team itself, the Redskins, that are offensive. They’re terrible. Washington turns the ball over four times and the Cowboys end their losing skid 24-10.

Nov. 2 v. Arizona – Larry Fitzgerald catches eleven passes for 201 yards and three scores as the Cardinals hand Dallas its sixth loss this season 34-24. Brandon Weeden was only allowed by the Cowboys coaches to hand the ball off to Murray and throw safe balls in the flat to Witten. It’s rumored that Romo will be able to return following the bye week. Jerry Wayne is googling Vinny Testaverde.

Nov. 11 v. Jacksonville in London – In an effort to globalize American football, the NFL flies the Cowboys and the Jaguars across the pond to stage a real regular season game in England. Too bad they didn’t send over two real regular NFL teams. This is bad football. And boring. The mostly Cowboys partisan crowd starts the wave during a lull early in the second quarter and keeps it going throughout the Spice Girls halftime show. Doug Free scores the game’s only touchdown on a tackle eligible fumble-rooskie. Dallas enters the bye week with a win 13-6.

Nov. 14 – The biggest news of the bye week is that Tony Romo appears to be fully recovered from his week five injury and is ready to quarterback the Cowboys down the stretch. That’s good because Drew Henson wasn’t returning Jerry Wayne’s calls. At 4-6, Dallas is still alive in the playoff race, only a game back of the Eagles and Giants in the dismal NFC East. In other news, t’s discovered that while in London the week before, Jerry Wayne spent almost one-and-a-half million dollars wining and dining NFL referees on a party yacht. The league declines to investigate. They figure even with crooked refs, the Cowboys can’t win.

Nov. 23 @ Giants – It’s hard to believe that Tom Coughlin is still the Giants’ coach. Tony Romo looks solid in his return, throwing for three scores in a relatively easy 35-21 victory on Sunday Night Football. Jason Witten becomes the Cowboys all-time leading receiver with his third grab in the third quarter. And after the game, Jerry Wayne announces that Rolando McClain has rejoined the team. Asked by reporters why he would bring back a guy who has been arrested multiple times and retired multiple times, Jerry replied, “I just really like his story.”

Nov. 27 v. Philadelphia – Eagles coach Chip Kelly never let up, running his no-huddle offense up and down the field and all over the Cowboys, ruining Thanksgiving Day in Dallas 42-27. At one point late in the first half, Jason Garrett intentionally spilled a plate of nachos onto the field near the hash marks at the 40-yard line to force an official time out. Who needs DeSean Jackson? Nick Foles completed an NFL record 19 one-yard passes to Darren Sproles in the blowout win.

Dec. 4 @ Chicago – In a rare scheduling quirk that has the Cowboys playing on consecutive Thursdays, Jay Cutler and the Bears beat the Cowboys 41-38. Cutler becomes the third quarterback this season to pass for more than 400 yards against the Cowboys defense. Jason Garrett reminds reporters that Dan Bailey made all five of his extra point attempts. Jerry Wayne contacts Nick Saban and tries to set up a lunch.

Dec. 14 @ Philadelphia – This game was originally set for prime time Sunday Night Football on NBC. But the league’s flex schedule moved it to the Lifetime Channel in order to show Buffalo versus Tampa Bay. Even on ten days rest, Dallas didn’t look ready in this one. Philly won it easily 27-13. Jerry Wayne gives Jason Garrett a confusing vote of confidence after the game. “I see progress every week with Jason,” says the owner. “I know what we’re doing at head coach. And until we stop doing what we’re doing, we’re going to keep doing it with Jason.” When a reporter asks Garrett about his teams’ notorious December swoons, the coach says, “There’s still a lot of football to be played. We’re just trying to get better every week.”

Dec. 21 v. Indianapolis – Andrew Luck throws for 428 yards and the  Colts wrap up home field advantage throughout the AFC playoffs with a 45-24 pasting of the Cowboys. At 5-10, the Cowboys are officially eliminated from postseason contention. Jerry Wayne places a phone call to Bobby Petrino and tells the Louisville coach they’re fine with office romances at Valley Ranch.

Dec. 28 @ Washington – An awkward moment before the season finale when Jason Garrett and his wife step into a stadium elevator and find Jerry Wayne on his way upstairs with Jon Gruden. Robert Griffin III plays in a full body cast, but it’s not enough to inspire his teammates to avoid the season sweep at the hands of the Cowboys. In a balanced attack, Demarco Murray runs for 127 yards and a touchdown while Tony Romo throws for 260 yards and two scores in the 28-17 victory. The Cowboys defense gives up nearly 500 yards to the team now referred to as the Washington First Americans and finish the year last in the league in every major statistical category. After the game, Sean Lee, recovering from third-degree burns suffered during a holiday cooking accident while deep-frying a turkey, declared himself ready to go in 2015. Jerry Wayne expresses great disappointment and even some surprise at the 6-10 finish. He tells reporters that Garrett and everyone on the staff and the team will be evaluated before the spring scouting combines. Rolando McClain announces his retirement. Stephen Jones begins looking at a list of promising draft-eligible offensive linemen. Tony Romo declares that going 6-10 is not the worst thing that will ever happen to him, while he and Jason Witten hop on a plane to the Virgin Islands.

You read it here first.