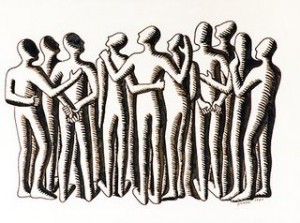 Our church at Central experienced homothumadon here together yesterday morning. Homothumadon is my second favorite Greek word from the New Testament, right behind koinonia. Homothumadon appears throughout the book of Acts to describe a fiery unity. It means passionate togetherness; emotional and active unity; intense and fevered oneness.

We had that here yesterday when we prayed to God together for our dear sister Judy Newton.

I had only anticipated a few of the people sitting around Lanny and Judy would actually gather around her and place their arms around her and hold her hands while we lifted up a congregational prayer on her behalf. She was diagnosed Friday afternoon with a couple of brain lesions in an out-of-the-blue, ambush, rip-the-rug-out-from-under-you, punch to the stomach, what-in-the-world-do-we-do-now kind of way. I was ready to lead that congregational prayer for her yesterday morning, but before I could start, people began getting up and walking over to Lanny and Judy and crowding around her in a spontaneous show of compassion and solidarity.

They came from all over our worship center. Those immediately behind and next to Judy wrapped their arms around her. But then a few people stood up to join them. And then a few more people. They came from a couple of rows over and from clear across the sanctuary. From the front and back and the middle. Young and old. People who’ve known Lanny and Judy for thirty years and people who’ve never met them. Men and women were crawling over people in their own pews to reach Judy. It’s a “preacher’s count,” I acknowledge, but I’m guessing almost a hundred of Judy’s brothers and sisters made their way to be with her during that prayer.

And I was so inspired. Yes, I thought, this is not doing church; this is being church.

As I watched the people stream toward Judy and surround her with love, I also became somewhat intimidated by my pressing task. As I waited and waited and waited while these people kept coming and coming and coming, I began to feel wholly inadequate for wording a prayer that would properly honor these folks, most of whom I still barely know, and these relationships, all of which I haven’t a clue. How could my prayer do it justice? I felt compelled to call on somebody else to lead it. How can my prayer match what I’m seeing?

When I finally started praying, it happened. Homothumadon. Unity in thought. Unity in mind. Unity in purpose. Unity in prayer. I wasn’t the one praying. We were all praying. We were all saying the “amen.” We were all together speaking with groans only the Holy Spirit can communicate to the Father. It was audible. It was genuine. It was together. We were in a fox hole together, as one, lifting this dear sister to the only God who can do anything about her circumstance. We were communicating to the gracious One who is sovereign over pain and disease. We were lifting Judy to the author of life and the destroyer of death. In faith. In desperation. In trust. As one.

We were all blessed by the prayer. Not the words of the prayer which, again, had everything to do with God’s Divine Spirit and nothing to do with me. We were blessed by the unity of the church. I know Lanny and Judy were encouraged and blessed. I know I was inspired. If you were here with us yesterday morning, I know you were moved, too. We all grew together yesterday morning. We matured spiritually as we considered Judy’s needs greater than our own. We grew together as family. And we became more childlike, more Christ like, as we depended solely on God.

Judy is set for surgery on her brain at 8:00 tomorrow morning, Tuesday October 11.