Home with the Blue Bell… Barely! 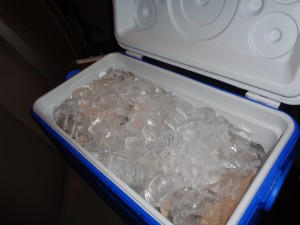 There was a short time — only for three or four months many, many years ago — back when I was still trying to get established in a full-time radio career that I worked a part time job as a courier in Dallas. I delivered very important packages all over Dallas/Ft.Worth, from business to business, time-sensitive documents, back and forth, criss-crossing all of North Texas. Every now and then, maybe a couple of times a week, I’d be handed something sealed up in an ice-chest to drive from one hospital to another hospital. And told to hurry.

A few of you were concerned enough about my mission to offer some very helpful advice by email and text. Thank you. Yes, I did pack the chest with ice last night and let it all get very cold for fifteen hours before I put the ice cream in there this afternoon. No, I did not use dry ice (too expensive and a little dangerous) nor did I put salt in the ice (maybe I should have). Yes, I wrapped both half-gallon cartons inside two plastic bags.

I only stopped once. I kept the inside of the truck as cool as I could stand it. I was in the truck for just under six hours. And when I got home, it looked like to me not one bit of the ice had melted. I felt really good about it. Until I started digging out the ice cream. The cartons were both a little mushy on the top and leaking out of the lid just a little. Just a little. But it all felt very, very soft.

Carrie-Anne is in Austin for a culinary arts training seminar, Carley is in Abilene for a girls church conference, and Whitney’s at work. And they’re all three texting me about the ice cream. How’s it going? Did it make it? Is it melted? Did it work?

I carefully opened up the cartons and stuck a spoon in the middle of each one. It was like sticking a straw into the middle of a really thick shake. I snapped a couple of pictures and sent them to the rest of the family. C-A responded with a crooked smile emoji. Carley sent back a really enthusiastic “If it can hold up a spoon, it’s solid enough!” 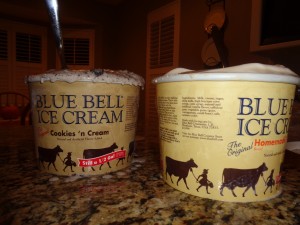 I’m worried that we won’t ever see Blue Bell in Amarillo again. They’ve decided to cut back from distributing to 23 states down to a total of fifteen. Even after all four phases of the new rollout are complete, sometime next year, eight states won’t be on the list. Among those states that Blue Bell is permanently cutting off: Colorado and New Mexico. I’m scared that means bad news for those of us in the oft-forgotten hinterlands of our great state.

Today might have been a practice run for future ice cream bootlegging operations. I did learn a couple of lessons; I think I can do better next time. And while it may not be quite as important as running a kidney or a liver to a hospital for a potentially life-saving operation… it’s similar. Very similar.