I can’t tell you how much fun that was last night. You know how when the Rangers are playing New York or the Red Sox in Arlington and it feels like there are more Yankees fans or Boston fans than Texas fans in the stadium? Well, it is so very cool to be on the other side of that deal.

Carrie-Anne and I are in Denver this week for a quick getaway together — no kids! — before the craziness of the school year hits. And the center piece of our trip is both games of this uncommon two game series between the Rangers and Rockies at Coors Field. My friend Jerry Schemmel, the radio voice of the Rockies, scored us some sweet tickets for both games — five rows up from first base —and hosted us in the KOA broadcast booth for the second and third innings last night. Being on the broadcast floor also gave us a chance to pop into the Fox Sports Southwest booth and say “hi” to my friend Steve Busby. Everything I know about baseball I learned by sitting next to Buzz in the Ballpark press box during my years with KRLD. 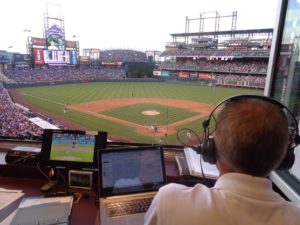 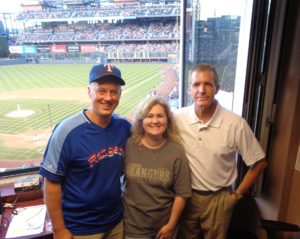 C-A and I noticed it during the day as we sight-saw around Denver: there were lots of Rangers fans in town. We spent most of the late morning and early afternoon on 16th street downtown and then later in the day at Denver’s historic Union Station. And we saw lots and lots of Rangers shirts and caps. We met Rangers fans from Nacogdoches and Richardson, from Dallas and San Angelo. It was quite remarkable. But nothing like inside Coors Field. It looked and felt like there was one Rangers fan for every two or three Rockies fans. It got to be kind of a joke along the concourse and at the concession stands that the Texans were taking over Colorado here in August just like they do during the winter.

You may already know that the Rangers went into the ninth inning trailing 3-1, having only achieved three base hits. Cole Hamels went six innings, giving up just two runs, but it was a struggle. Colorado was playing excellent defense, robbing several Rangers of hits. And we just couldn’t get anything going on the field or in the stands. When Beltre hit a homerun to cut the lead in half at 2-1, it sounded like the home team had scored. It was loud. But it was fleeting because Kela gave the run right back and it didn’t look like it was in the cards for Texas.

But then Profar and Odor worked a perfect double-steal in the 9th, Andrus drove them both home with a sharp single through the box to tie the game, and then with two outs Moreland won it with a pinch-hit double into the right field corner. Three dramatic runs in the ninth to win the game and the whole place went crazy. The Rangers fans completely took over the stadium and it was so much fun. You know how that thing works: fans high-fiving across aisles, fist bumps, taking pictures. But the coolest thing was being a part of “Let’s Go Rangers! Clap, Clap! Clap, Clap, Clap!” in somebody else’s stadium. What a great night!

We’re taking in the get away game this afternoon and then heading home tomorrow. The Rangers have an 8-1/2 game lead in the West and we had a really cool experience here in Denver.