Heart of a Disciple: Humility 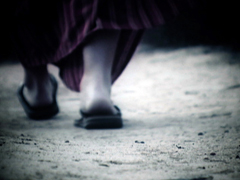 We’re considering the qualities that were found in Jesus’ twelve disciples that distinguished them from the rest of the people who saw and heard the Lord, who witnessed and experienced his teachings and miracles, his truth and grace. What made them different?

The most obvious characteristic in the Twelve, but lacking in all the others is humility. Most of the people who came in contact with Jesus had their own agendas. They were trying to use him for their own purposes or they just wanted him to approve or rubber-stamp some belief or practice they were already doing. Plenty of people are coming to Jesus during his ministry. But their minds are closed before they get to him.

The kind of student on which Jesus insists has an open heart and a genuine willingness to listen. Our Lord calls the kind of student who allows his teachings to reshape that student’s priorities and transform his worldview.

Sometimes the apostles didn’t like what Jesus said, but they were always humble about it. They never walked away. Even when they were baffled by his teaching — it seems like on every other page of the Gospels — they still understood that the teaching was special and that Jesus was a special kind of teacher. That’s why, in John 6, when everybody is leaving Jesus, when Jesus’ teachings were difficult to understand and follow, they remained humble in their response. Even when they didn’t get it either, the Twelve responded to Jesus with, “Lord, to whom shall we go? You have the words of eternal life. We believe and know that you are the holy one of God.”

They were simple. They were honest. And they were humble. Sometimes they seem stupid. Sometimes weak. Sometimes ignorant. They certainly come across in the Gospels as the duh-ciples. But they were always invested. Always committed. Of all the peopel Jesus taught, the apostles are the ones who are still there after the tricky parables, asking what they mean. Wanting to know. Wanting to learn.

Lots of people asked Jesus questions to trick him or trap him. But the apostles asked him questions because they truly wanted to know the answers and follow the teachings. Sometimes we come to Jesus’ teachings in Scripture looking for him to validate or affirm what we think we already know. If Jesus doesn’t uphold our view of divorce and remarriage, if the Lord doesn’t support what we believe or practice regarding worship or relationships or forgiveness, we’ll keep looking for other teachings. And if we can’t find them, we ignore Jesus altogether. We hang on with a white-knuckle death grip to his words that uphold what we believe, but relegate to the trash heap his words that challenge us or stretch us beyond what we’ve always known. That is the opposite of the humble heart Jesus requires in a disciple.

Of course, they learned that humility and honesty from Jesus himself. Jesus said, “Learn from me, for I am gentle and humble in heart.” He came, in his own words, not to be served, but to serve, and to give his very life for others. If we’re really going to learn from him, if we’re really going to allow his Lordship over us to shape us into his holy image, we have to exhibit a similar humility that bows before Jesus with an open heart and a confessing spirit.