He Saw the Disciples

“After leaving them, he went up on a mountainside to pray. When evening came, the boat was in the middle of the lake, and he was alone on land. He saw the disciples straining at the oars, because the wind was against them.” ~Mark 6:46-48 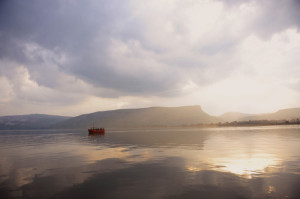 In my desires to follow Jesus, in my best efforts to obey God, sometimes I feel like I’m beating my brains out against the wind. I’m rowing and rowing and rowing and not getting anywhere. I’m doing and working and striving and I’m stuck. Nothing’s happening. The wind is against me, it’s in my face. And I get frustrated. And I doubt.

You feel that, too. I know you do. There are so many things that fight against us, so many things that oppose us. Just the chaos of life in this godless culture is enough. But Jesus has put us here. He’s placed us here in the middle of crime and cancer and illness and death. We fight failure and rejection and ridicule and judgment. We’re distressed by divisions in the Church. We’re in turmoil over circumstances with our children or grandchildren. We’re struggling with our jobs. Temptation and sin and dishonesty and abuse. Vengeance and greed. Selfishness and lust. Yes, the wind is against us. And we strain at the oars.

Please take comfort in the fact that Jesus is watching you strain at the oars. He sees you. He knows. He’s aware of every struggle. He sees every battle. He knows the things that are causing you distress and heartache. He’s watching you.

And he is praying for you. He’s talking to the Father about you right now. Scripture tells us that Christ Jesus lives to intercede for us. It’s what he does. He watches the disciples and he prays. He’s watching you today and he’s praying. He’s pointing you out to the Father right now. He’s talking about you to God. And I imagine as he watches you strain at the oars, he’s very proud of you.