Have Our Own Vatican II 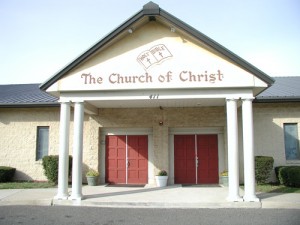 In the 1960s, a number of influential leaders in the Roman Catholic Church decided that if they were going to relate to a rapidly changing world they were going to have to make some significant changes. Those changes, outlined in Vatican II in 1965, were sweeping. They were monumental. Dramatic. Shocking, even.

In the fifth chapter of Leroy Garrett’s “What Must the Churches of Christ Do to Be Saved?” he makes the assertion that if the Roman Catholic Church can change its way of thinking and practicing, then certainly the Churches of Christ can, too. “While change comes painfully and with difficulty,” Garrett writes, “people can and will change when they see that they must do so to be saved.”

As we consider together Garrett’s challenging book chapter by chapter, we focus today on his fifth suggestion:

Have our own Vatican II.

Garrett proposes four ideas from one of Vatican II’s primary documents, The Declaration of Religious Liberty. Let’s consider each one in turn.

1. Doctrine does develop; dogma does change.

We may have as much difficulty admitting this as did the fathers of Vatican II who were as steeped in their tradition as ourselves. [It] does not mean, of course, that basic and essential doctrines of the Christian faith change, but that in the general teachings of the church on how to live in a changing world dogma may have to be revised. That the apostles would impose an order or procedure upon the ancient church does not necessarily mean that they would say the same thing to the 21st century church.

The renewal leaders at Vatican II may have first thought it hopeless that the Roman Church would ever conduct mass in English instead of the old Latin. But it was done, to the consternation of many. Could we make some meaningful changes in the way we celebrate the Lord’s supper…? The point is that we must become open to that sort of thing. There is nothing wrong in a church saying, “We once believed that way but we don’t believe that way anymore; we once practiced that but we do so no longer.”

One thing I’ve run into when talking with people about our communion time at the table or about the role of the Law of Moses in our salvation or God’s grace or any number of important doctrinal matters that I see differently now than I did just ten or twelve years ago is the refusal to admit that we might possibly have been wrong about something. About anything. Great godly men have told me to my face on several occasions that if I’m right about the particular topic being discussed, “then that means I’ve been teaching error for the past 45 years!” Why can’t any of us ever admit we were wrong?

We don’t even have to admit to being wrong. Can’t we just admit to growth? I would hope very much that you feel differently about some things now than you did 45 years ago. I would hope you could look back at some of your notes from 20 years ago and cringe at some of the things you taught. Why do we have such a difficult time with admitting that we haven’t always had every single thing figured out?

2. Coercion in matters of conscience is utterly inappropriate.

It may surprise you that Roman Catholic authorities at Vatican II suported this resolution: “Truth cannot impose itself except by virtue of its own truth, as it makes its entrance into the mind at once quietly and with power.”

If you adjudge this as a welcome change for a church that has often through the centuries dominated by coercive means, you must also grant that we in Churches of Christ have also been coercive. If others have been papacy-dominated and church-dominated, we have been elder-dominated, dogma-dominated, tradition-dominated, editor-dominated. If the Roman Church has its written creeds we have our unwritten creeds, and unwritten ones can be even more coercive and domineering than written ones.

We do have a CofC tendency to limit the freedoms of our members. Some of the more open-minded and progressive thinkers among us won’t speak out for fear of being labeled or not being allowed to teach. We identify little buzz words and catch phrases that, as soon as they’re uttered in conversation or debate, completly shut down the dialogue. We claim to be autonomous churches, but the ways we label and attack those who are different from us denies that claim outright. Our freedoms and diversities are God-ordained. But we seem to be threatened by them.

3. We have at times acted “hardly in accord with the spirit of the Gospel and even opposed it.”

If any church on earth needs to declare to the world that it has often been “hardly in accord with the spirit of the Gospel” and has violated the principles of the very Book it claims to honor, it is the Churches of Christ. While the Roman Church has pilloried the schismatics we have skinned the sects. While we claim to believe in unity, we are the one church in the community that is known to have nothing to do with any other Christians. We are widely known as the only ones going to heaven and the only true Christians. The Roman Catholics in 1965 looked at themselves and said they had been wrong.

(Allright, time for some full disclosure here: I hesitated for several months to consider this book in this way on the blog. Garrett is a lightning rod among our Churches of Christ, no doubt. That doesn’t mean he doesn’t have wonderful and prophetic things to say, things that must be said, things that must be heeded. It’s his overly critical and cynical tone in a few particular places in this book that caused the pause. He writes in broad brush strokes that cover a whole lot of our past but not every single part of it, a whole lot of our congregations but not all of them. Yes, I was raised this way; but not everybody was. Your church may be like this today; but mine’s not. I know some of you have purchased Garrett’s book and are following along at home. Please know, I do cringe at some of this. But, overall, the ideas in the book and the dialogue it should provoke are important. Very important.)

4. We extend our hand to all other Christians.

For centuries the Roman Church labeled other Christians as “erring schismatics,” but at Vatican II it went on record as acknowledging all other Christians as true brothers and sisters in Christ… We must regard all other Christians as our equals, beginning right now. We must join with them and with each other in a new spirit of dialogue and mutual respect, a new freshness in perspective and interpretation. We must summons the courage to confront the problems of our own history. We must modernize the Churches of Christ, liberating ourselves from the mentality of the 1940s, and make our religion relevant to our day and time.

OK, we don’t have a Vatican. We don’t have a governing convention or a denominational headquarters. I’m not sure how sweeping changes in thought and practice and philosophy could work across all our Church of Christ congregations. It probably can’t. It happens very slowly with us. Small group by small group. Congregation by congregation. Generation by generation. Region by region. The only thing that could speed it up is if you yourself picked up a torch and passed it on.