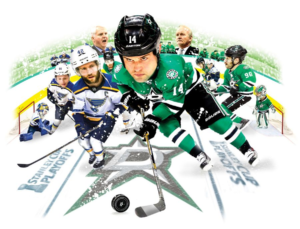 I know it sounds blasphemous here in the great state of Texas. I know it cuts across all Texas sensibilities and goes against the grains of my culture and my upbringing. But here we go. I’m saying this and I’m standing by it:

NHL Stanley Cup Playoff hockey beats football any day of the week. And for energy, nerves, tension, excitement and drama, any Game Seven in the NHL playoffs beats any football game at any level. Ever.

The most obvious attraction to me is that overtime in a hockey playoff game is the only true “sudden death” of any sport. In basketball a tie game is settled with a ticking clock. In baseball the home team always gets a last at bat. In football you can generally see the end of overtime coming a mile away as the running back takes two harmless dives up the middle to set up the 40-yard field goal. But in hockey, overtime always ends suddenly. Without warning. A turnover in neutral ice, an odd-man rush off a nasty collision, a clang off a cross bar and behind the goalie — it’s fast and it’s completely unpredictable. The puck changes directions in a flash, faster than you can imagine, and your team goes from having all the numbers and all the momentum at one end of the ice to shaking hands and cleaning out their lockers in about two seconds. There’s nothing close to that kind of tension and drama in any other sport.

The thing, though, that I’ve come to appreciate more about hockey Game Sevens is the grind of the nearly two weeks it takes the two teams to get there. Even if the two teams are in different divisions and don’t have much of a rivalry, by the time they get to Game Seven, they know each other very well. The game is too physical, too demanding, to in-your-face intense. The two teams and all their players have worked up a true distaste for each other by this point. But take a true division rivalry, like with the Stars and Blues who face off in a Game Seven tonight in Dallas for a berth in the Western Conference Championship, and it’s hatred with felonious intent. For the fans, after six games, we’ve come to know the opposition players almost as well as we know our home team. But for the players themselves, there’s an animosity between them that adds another layer to the competition that’s not duplicated by any other sport.

I don’t know what’s going to happen tonight. But as Brent Gilchrist said after a crushing Game Seven defeat to the Edmonton Oilers at Reunion Arena in ’97, you’re never more alive than during a Game Seven.