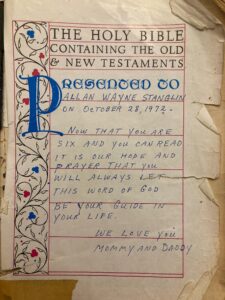 I was looking through my closet this week for a 56-year-old piece of paper I want to read to our church this Sunday when I came across the first Bible I ever owned. My parents gave it to me on my sixth birthday, almost fifty years ago. This is the Bible I had when I was a kid growing up in the Pleasant Grove Church of Christ in Dallas. I wrote a lot of notes in the margins of this Bible. Back then it was two Bible classes and three sermons per week – no children’s worship. We sat through all of it. And I looked up every Scripture and I wrote a lot of notes. You can read the notes in my Bible and tell how I was raised.

Next to Psalm 51 I wrote, “This is not original sin.” In a couple of places that describe the musical instruments in the tabernacle and the temple I wrote, “Doesn’t mean we can use them now.” Every single page of the New Testament in this Bible is highlighted, marked up, or underlined. There are also lots of handwritten notes.

“When we work God’s plan, God’s plan will work.”
“You can’t kill time without injuring eternity.”
“You can’t die in Christ unless you live in Christ.”
“A fellow wrapped up in himself makes a very small package.” 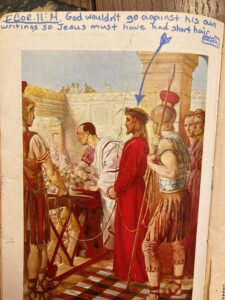 I don’t make fun of the notes in my first Bible. I’m not ashamed of them. Everything in this first Bible reminds me of growing up in that Pleasant Grove church and brings to mind really happy memories for me. This Bible reminds me that I was raised by people who loved me and taught me and cared about me and passed the Christian faith on to me.

This excellent reproduction of a Joe Malone sermon illustration, drawn when I was fourteen, reminds me of the sayings he would repeat on rotation at least every four or five sermons. Little ditties like, “Let one drop the sidewalk smirch, and it’s too wet to go to church.” I also remember the good-natured teasing he gave me when I wore that arrowhead necklace from Avon when I was eleven or twelve. I remember bugging him in his office during those summer days while my mom was working as the church secretary. I don’t remember him ever being annoyed.

I wrote, “Mike made me mess up” next to a really crooked underlining. That reminds me of my friend Mike Cunningham. His dad, Chuck. They hosted our youth devos. I traded a magic kit to Mike for his ELO “Time” album in 1981.

I remember Aaron Welch. He’s the guy who picked people to pass the Lord’s Supper trays. He always did it the same way. He’d come up to you before church started and say, “Old man, you wanna help us with the Lord’s Supper?” It didn’t matter that I was twelve. He thought it was funny to call Todd and Mike and me old men.

Jim Martin was one of our regular song leaders and I can still see him leading “Trust and Obey” as I walked down the aisle to be baptized when I was eleven. His middle finger was always oddly set a little lower than the rest of his hand.

Tillie Prosser was a high school music teacher who taught us boys how to lead singing in an upstairs classroom at 5:00 on Sunday afternoons. Her favorite song was “He Keeps Me Singing” and we all led it together at the start of every class. When we sing it today, I still hear Sister Prosser’s voice, counting the beats, reminding us to hold it out, “Jesus, Jesus, Jesus, sweetest name I know, two, three, four.”

Kayla Casebolt was the Sunday School teacher who had a giant sandbox in her room where she used little plastic people and animals to tell the stories.

Van and Laura Simpson drove us to youth rallies and Summer Youth Series.

Glen Burroughs taught our high school class and taught me how to drive a stick. 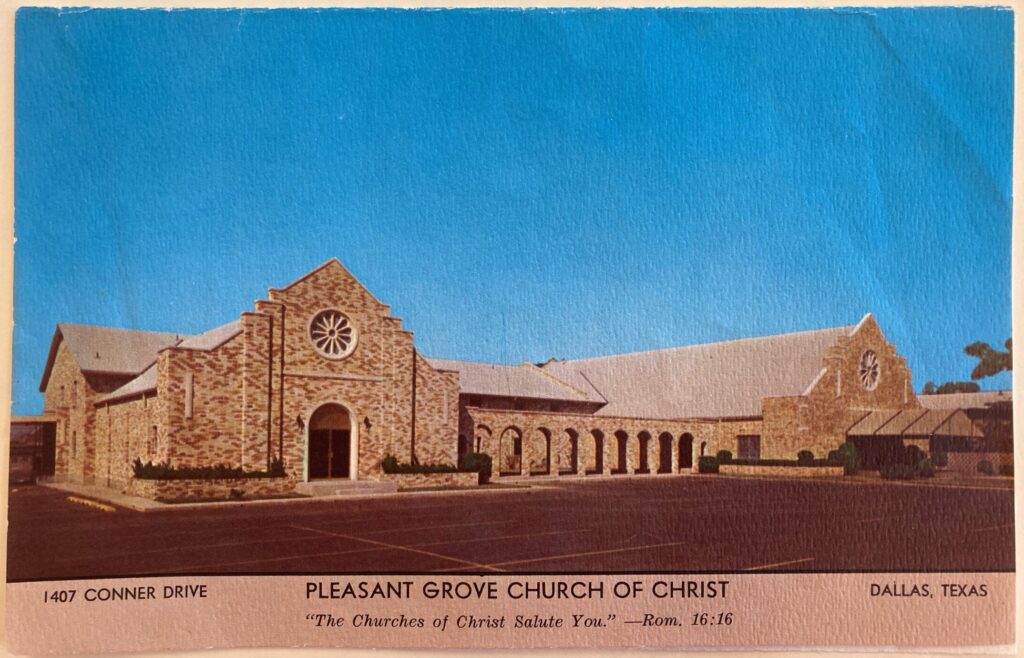 The first time I ever led a prayer during Sunday night church I had to stand on my tiptoes to reach the microphone. It was the closing prayer and I was extremely nervous. I must have been eleven or twelve. I couldn’t see anything over the massive podium. When it was over, Johnny Cobbler approached me in the long hallway from the worship center to the south parking lot doors. Johnny Cobbler was one of the cool teenagers. He had a car and I perceived him to be the alpha leader of the youth group. I was both obsessed with him and frightened of him. He laughed at me and said, “Did you lead the closing prayer? Somebody said you led the prayer, but I couldn’t see anybody up there!” And then he shook my hand and said, “It was a good prayer.” There must have been four dozen people who told me I led a good prayer that night. But I remember Johnny Cobbler.

I remember one Sunday night during my senior year of high school when I accidentally wore a Huey Lewis and the News t-shirt to serve the Lord’s Supper to the reprobates who had been providentially hindered that morning. One of the elders, Kenneth Lybrand, told me after church that it wasn’t right. I shouldn’t wear a shirt like that to serve the Lord’s Table. And I remember Elaine Titus overhearing Brother Lybrand and telling me a few minutes later that it was fine. She told me she could tell I was up there to serve the Lord and it didn’t matter what I was wearing. That meant so much to me. I also remember that Brother Lybrand is the one who gave my parents the money to adopt my little sister Sharon. I can’t tell you how much that means to me.

That church raised me. Those people shaped me. A lot of my ideas about God and Christ, a lot of my understandings about salvation and love, a lot of what I believe and some of what I push back against goes back to the Pleasant Grove Church of Christ. A lot of who I am in Christ today goes back to that community of faith at P-Grove that raised me and shaped me in Jesus.

You’ve got a lot of little kids in your church. I know you do. Lots of boys and girls between the ages of five and fifteen who will never forget the things you say to them. The attention you pay to them. The way you make them feel. The time you went out of your way to assure them they are an important part of your church family. Or those other times. Those other things you said.

They’re all paying attention this Sunday. And they remember.