Formed by Our Phones

(This is part three of a four part rant / lament / explanation / provocative essay on why I don’t own a smartphone. I’m using Dr. Keith Stanglin’s recent Austin Grad blog post on the same topic as a conversation partner.) 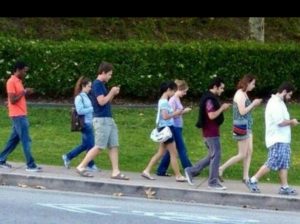 The main reason I don’t own a smartphone is that I don’t want to become like the kind of people who own smartphones. Now, before you get all tuned up, hear me out. Don’t get offended by that; there’s much more offensive stuff coming later. The purpose of today’s post is to consider whether these phones are making us better people or worse people, whether smartphones make us more like Christ or less like Christ.

First, our brains are being formed by our phones and the evidence is mounting. Smartphones change the way we process information. Those who study these kinds of things are concluding that smartphones are making us slower and less capable of knowing the difference between important pieces of information and information that is insignificant. One such study, recently conducted by the National Academy of Sciences, shows that heavy media multitaskers, when faced with making a decision, are less able to distinguish irrelevant information from relevant. The study also concludes that smartphone users show diminished abilities to remember or memorize. They pay more attention to irrelevant stimuli — they’re more easily distracted — than non smartphone users. Overall, media multitaskers are “associated with a distinct approach to fundamental information processing.” And it’s not good. This form of technology shuts down memorization, hinders concentration and learning, and hampers comprehension and retention.

I don’t need that. The natural ravages that come with being fifty years old, enhanced by a steady flow of Diet Dr Pepper, are causing me enough troubles already.

Second, our relationships are being formed by our phones. We are more and more connected to fewer and fewer “real” friends and, thus, becoming lonelier and lonelier. Our text and Facebook and Instagram conversations are not real conversations. Experts tell us it takes a full seven minutes to just start a serious conversation. This article in The Atlantic reviews several studies that show smartphones and social media have turned us into the loneliest people in the history of the world. The studies reveal a link between online interactions and loneliness. And it’s getting worse.

Third, well… the list is too long. This post shouldn’t just be a long litany of the bad behaviors and personality shifts influenced by smartphones. Hofstra University’s Kara Alaimo has started a pretty good list in this article, “Seven Ways the iPhone has Made Life Worse.” It seems to me the research is telling us what we have already known for a while. 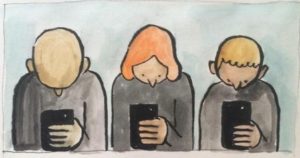 The main question of today’s post is whether our smartphones make us more like Christ or less like Christ. For this, I turn to the main part of Keith’s article:

“My problems with cellphones, and smartphones in particular, can be boiled down to the fact that, given the way most people use them, there is virtually nothing virtuous about them…

Think of the four cardinal virtues — justice, temperance, courage, prudence. Someone more creative than I can perhaps articulate how smartphones enhance those classic virtues; I don’t see it.

Take the theological virtues of faith, hope, and love. I can say with even more confidence that smartphones do nothing to increase those. Conduct the same exercise with the fruit of the Spirit (joy, peace, patience, kindness, self-control, and so on), or the two greatest love commands. Smartphones do not help, but almost always hinder us from cultivating these virtues and disciplines.

And most observant people recognize this. There is a growing consensus that smartphones have altered human behavior. Christians usually acknowledge that the alteration has been for the worse. On at least three separate occasions in the last couple of years, I’ve had the opportunity to ask large groups of Christians an open-ended question about what our idols are and what things distract us from what should be the chief goals in life. Invariably, they hold up their phones (yes, they have them in Sunday school).

No one seriously hazards that these phones are helping us be better people. No one thinks that a smartphone in every hand has increased true human flourishing or the imitation of Christ. If becoming like God is the goal of moral life, then — and this really is my main point — the use of smartphones is an ethical issue, but one that is seldom discussed or even considered in this light.”

I don’t want to trade real, personal, face-to-face conversations for brief texts and Facebook posts. I don’t want to interrupt or shut down a stimulating conversation by fact-checking with Google. I don’t want to break eye contact with someone I love in order to check my phone for the 40th time to see if the Rangers have scored or if someone’s commented on my blog. I don’t want to be talking to my wife on the phone and notice in my peripheral vision that I’ve received an email from a church elder. I don’t want to be the kind of person who has his phone with him, in his pocket, on the table, in his hand, on the pew, at the restaurant, in the meeting — during every waking and most sleeping moments.

Much more than that, I know I can be a better person and a better disciple of Jesus and a better minister to you if I don’t have a smartphone.

One of the reasons I got out of the sports radio industry is that the culture of that business was turning me into a negative person. I was becoming more critical, more negative, more “right,” more obnoxious, more cynical. It’s the nature of the industry and it was changing me into something I didn’t like.

Smartphones are not neutral. They are intentionally built and programmed for distraction. By their very nature, smartphones are meant to keep our eyes glued to them, designed to keep our brains preoccupied with unimportant matters that continually scroll through or pop up, keeping us from the people and things in life that mean the most.

It’s a legitimate question, but nobody in the Christian community seems to want to tackle it. Do our smartphones make us better or worse people? Do they make us more like Christ or less like Christ?