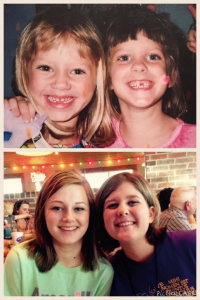 Valerie and Jordan were born six weeks apart in the winter of 1997.  We were living in Marble Falls while Jordan’s parents, Billy and Shannon Whiteley, were living fourteen miles north of us in Burnet. But we were members together at the Marble Falls Church of Christ and really great friends. Even after we parted ways — we’ve moved seven times since then and they’ve moved twice — we’ve always stayed close. We’re the kind of friends who can only see each other two or three times a year, even less since we moved to Amarillo, and still just pick right up where we left off.

So, Jordan’s in town this weekend with the UIL Latin Competitions which are being held at Amarillo High School. She nailed her solo yesterday and is competing in the Latin quiz this afternoon. And we were so blessed to pick her up at noon today and spend a couple of hours with her at Blue Sky, introducing her to the cheeseburger that changes lives. How great to get caught up.

She and Valerie were each other’s first best friends. The picture on top is from 2002 when they were five-years-old and playing with Beanie Babies and singing Veggie Tales songs. The picture on the bottom is from today, thirteen years later, at Blue Sky. Jordan’s heading to the University of Arkansas at the end of this summer and Valerie’s enrolling at West Texas A&M. I don’t think we’ve seen Jordan or her parents in over four years. But today, we picked up right where we left off.

Thanks for letting us horn in on your weekend, Jordan. Thanks for clarifying the correct usage of “ratchet” and “salty.” And thanks for your sweet friendship with our daughter.