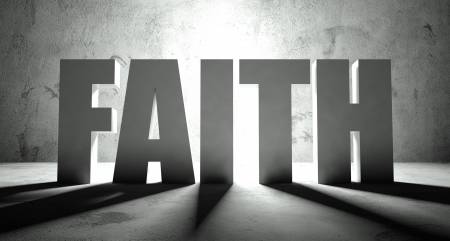 We’ve defined faith according to the stories and examples in Hebrews 11 as bold action in response to the promise of God regarding an unseen future. That’s the thing the people and the stories in this Faith Ring of Honor have in common. These people demonstrated their faith by living into and through some powerful verbs.

In each one of these familiar stories, the hero of faith was facing overwhelming odds. They were each huge underdogs. From a human standpoint, they had little or not chance to come out on top. But, by faith, they each took their eyes off the obvious, they turned their eyes away from the physical things they could see, and they did something.

Noah refused to focus on the clear skies and sunshine. He took God at his word and focused on the promise. Abraham refused to look at the 100 candles on his birthday cake and the fact his wife had been reading AARP Magazine for 45 years and by faith looked instead to God’s promise. Moses was not deceived by the glitter of the Egyptian palace or the security in his royal position; he acted boldly, motivated only by God’s promise to love him and reward him in the future.

God’s people ignored the archers and warriors perched on the Jericho walls, Daniel walked into a den of lions, the Hebrew exiles stepped into a fiery furnace — not based on what made sense, not based on what seemed smart, not based on anything they could see. They were motivated solely by the greatest reality of all: we serve a faithful God, a God who makes promises and keeps them, a God who is forever faithful to his Word and forever faithful to his people. And for the most part, that ultimate reality is unseen. But people of faith, God’s people of faith, understand — we know — just because we can’t see something doesn’t mean it’s not real. We fix our eyes not on what is seen but on what is unseen; for what is seen is temporary, but what is unseen is eternal.

But the seen things — that seen reality — can be so overwhelming.

I know a dozen people who are battling life-threatening diseases with everything they’ve got. And they’ve tried everything. But every day is more painful than the day before. And less sure. They see the test results and the doctors’ reports and there’s not any good news.

Your family’s a mess. Maybe your marriage. You see the hateful emails and dirty looks and empty chairs.

Maybe you’re in a spiritual desert right now. The Bible’s not speaking to you. Your prayers aren’t getting through. You feel lost. Maybe you’re caught up in sin. You feel a long way from God. You feel abandoned.

Like Abraham: one man and as good as dead. You’re outnumbered, out-muscled, out-smarted, and out of options. Out of luck. You’re staring into the teeth of lions, you’re tiny compared to the giant walls that are blocking you out, you’re feeling the heat of the furnace — all those things.

This is exactly the time for your faith to show itself in some verbs.

See, faith is not belief. It’s not even strong belief. Faith is never: Yes, I agree with those theological points, I believe these spiritual suppositions, these sets of religious principles make sense to me. That’s not faith. Faith is action. Faith is proven by verbs.