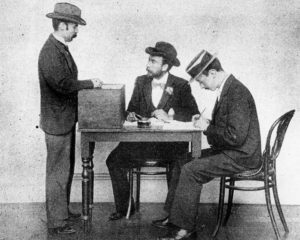 I’ve got several pictures I want to post tonight from our adventures in the Holy Lands. But, first, a couple of things about tomorrow’s elections in the USA. It’s 9:30pm Monday night over here, 1:30pm Monday afternoon in Texas.

I’ve written a column for the Amarillo Globe News’ Faith section that ran in yesterday’s Sunday editions. It’s also in their on-line editions here. No one has emailed me about the column yet, so I’m hopeful I’ll still have a job when I return home Thursday night. If you haven’t already, I’d like you to read the full column. Keep in mind that I do not write the headline and I have no control over it. Just in case you don’t click the link, here’s a paragraph or two I really want you to read:

“Each of us has to make our own decisions about what we’re going to do Tuesday — whether or not to vote; if we do vote, for which candidate to cast a ballot; and to what extent we place our hopes and dreams in this country’s politics and candidates. The guiding principle for Christians is that we know our God is chasing different goals and using different methods than those represented on the ballots. The way of our God is always different from the way of the world.

It’s not a cynical position like that of 20th century activist Emma Goldman who said, ‘If voting changed anything, they’d make it illegal.’ It’s more about a proper perspective when weighing just how much, if any, of himself a Christian wants to pour into the process. Pay attention to how much energy and emotion you’re putting into this thing. Be aware of how the ups and downs of this week impact your behaviors. Keep your allegiances in the correct order.”

There are quotes from Ralph Nader, Charles Spurgeon, and Hunter S. Thompson in the piece. And I also included this gem from C. S. Lewis: “He who surrenders himself without reservation to the temporal claims of a nation or a party or a class is rendering to Caesar that which, of all things, most emphatically belongs to God himself.”

Now, a few more pictures from “Anton’s Nineteen” in Israel. As always, click on the pic to get the full size.

Sunday morning seven of us climbed the fabled Serpent’s Path to the top of Masada in the Judean Desert. The Jewish historian Josephus wrote about the Snake Path, claiming that “courage was quelled in every man and beast who attempted to walk the Serpent’s Path by the sheer terror of it.” Well, it wasn’t quite that bad. We made it to the top in almost exactly one hour. 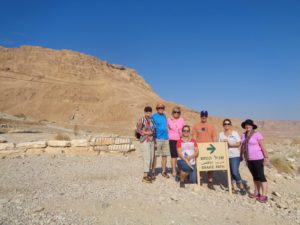 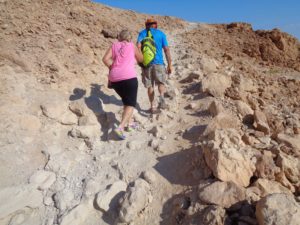 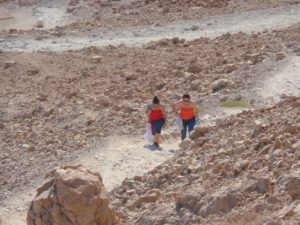 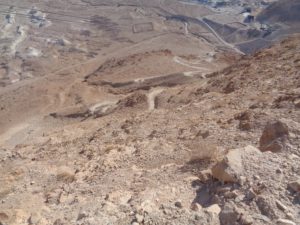 Later that morning we gathered for worship and a communion meal among the waterfalls and pools at En Gedi, the place of David’s escape from King Saul. It was our oasis in the desert, our reminder that God is our rock and our refuge, and that he does prepare a table before us in the presence of our enemies. It was inspiring to sing and pray together in that glorious setting. And it was entertaining watching Mary Ann pop the cork on the King David bottle of red wine from the Benjamin winery here in Israel we shared during communion. 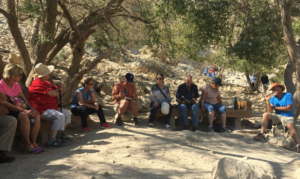 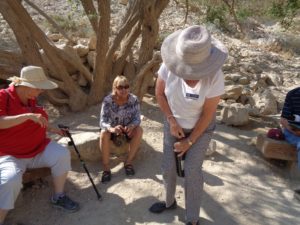 After worship we toured Qumran, the site of the ancient Essenes community and the discovery of the Dead Sea scrolls. And then it was on to Jerusalem! We arrived to a cool and windy City of Peace just as the sun was setting for some beautiful picture opportunities and an inspiring preview to our final three days together in Israel. This is Elaine with me at the top of Mount Scopus, on the east side of Jerusalem. 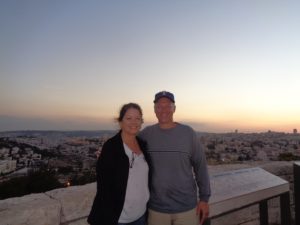 I pray that your perspective will be Christ-centered and Bible-based over the coming few days and that our God will be given glory and praise by and through his people during and after this weird election.