Confess That We Have Been Wrong

We’re hosting a free Acappella Reunion concert here at Central tomorrow night. The current touring group will be joined on stage by Keith Lancaster and some of the originals, including our very own Kevin Schaffer, for what promises to be a high octane, high energy show. I’ve been blessed to enjoy the worship and encouragement led and provided by Acappella many times over the course of my life. In Abilene, in Tulsa, and at various churches over the years, including a really wonderful show two years ago at Legacy. Keith Lancaster, of course, has always blessed us with his gifted song leading and a cappella workshops.

Most of the older guys got into town last night and blessed us this morning with an impromptu performance at our weekly Loaves and Fishes outreach ministry. It was just a couple of songs, but they had about 140 of us snapping our fingers and clapping our hands and really getting excited for tomorrow’s concert. So good to see Keith again. And, man, Kevin is really on Cloud Nine. Big time. 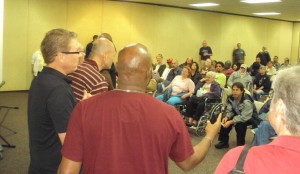 The doors open at 6:00 tomorrow evening here at Central for those who have their free tickets. Doors open for everybody else at 6:45 and the show starts at 7:00. 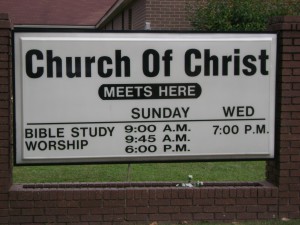 Acknowledging together that we in the Churches of Christ must do something different if we’re going to remain a viable witness to the Christian faith in our rapidly changing world, we’re spending the next several days in this space taking Leroy Garrett’s “What Must the Church of Christ Do to Be Saved?” chapter by chapter.

Here’s Garrett’s first suggestion: We must confess that we have been wrong about some things.

The sin that we must confess is our patent refusal to have anything to do with other churches and Christians. In the old days we attacked other churches from the pulpit and mailed out tracts condemning “denominationalism,” implying of course that we were not a denomination. On the radio we “skinned the sects” and we debated anyone who had the nerve to take us on. We soon gained the reputation of believing that we were the only true church, the only faithful Christians, and the only ones going to heaven. We succeeded in causing other believers to resent us if not hate us. When they showed such resentment our response was that they didn’t really want the truth. In rejecting us they rejected God himself!

You know, I grew up this way, believing and proclaiming that we were the only ones going to heaven. Did you? I vividly recall as a young child telling my good friend and next-door-neighbor, Kevin, that he was going to hell because he didn’t go to church. And I know I told my across-the-street neighbor, Sherry,  just as many times that she, too, was going to hell. Sherry went to church. Every Sunday and Wednesday. She just went to the wrong one.

I cringe when I remember those arrogant positions with which I would so proudly and confidently beat up my friends. I don’t remember exactly when I stopped spouting that nonsense out loud; it probably was during my college years when I heard about God’s grace for the very first time, and actually experienced it first hand. But, even while keeping those thoughts to myself and, perhaps, beginning to mature out of them, I still harbored this sectarian attitude deep inside me. I ran into an old high school football coach at a Tulsa Workshop in 2004 and, while exchanging comments during a powerfully moving congregational song (probably led by Keith Lancaster), I said to him, “Yeah, but I’m still not sure about us trying to get back together with the Christian Churches.”

That was less than ten years ago!

Garrett calls for corporate confession of this sin. Preachers and elders, in the pulpits, on our websites, in our publications, confessing the wrong, expressing remorse, accepting the blame, and vowing to change.

Garrett says even though the “we’re the only ones going to heaven” rhetoric has declined — significantly, thankfully — we’re still very “sectarian  and exclusivistic” in the ways we behave. We don’t talk badly about other churches, but we still don’t have anything to do with them. It’s as if they don’t exist. No joint Thanksgiving or Easter services. No joint community service projects. No cooperative campaigns. We still talk about “the Lord’s church” or “the church” and mean “Church of Christ.”

We can be saved from such sectarian exclusivism without compromising any truth we hold. Our preachers can belong to the ministerial alliance and we can join “the denominations” in a Thanksgiving service without approving of any doctrine we consider false, just as we can read a commentary written by a Methodist (as we do) or sing hymns written by Roman Catholics (as we do) without approving of any error practiced by those churches.

We are supposed to be a people who believe in and work for the unity of all Christians — that is our heritage! — but how can we be a witness for the oneness of all believers when we isolate ourselves from all other believers?

I’m thankful that during the Great Communion autumn of 2009, we at Legacy participated in a joint communion service with all the Restoration Movement churches at Compass Christian. In fact, I’d say there were more Legacy people there than Compass people. It was beautiful. But we need to do more. I’m thankful that here at Central our shepherds actively call up elders at other churches in town and meet at their buildings to pray with them. I’m grateful that we’ve already swapped pulpits in the past with preachers in the local Christian churches. I’m so blessed to be encouraged here to meet and pray and plan with the pastors of the other downtown churches here in Amarillo. It’s beautiful. It’s powerful. But we need to do more.

Garrett claims that if we actively confess that we were wrong and enthusiastically begin to embrace other believers as equals by the grace of God, our Church of Christ people would be liberated and encouraged. And our elders and preachers would be shocked to quickly learn that most of our members didn’t really believe that way anyway.